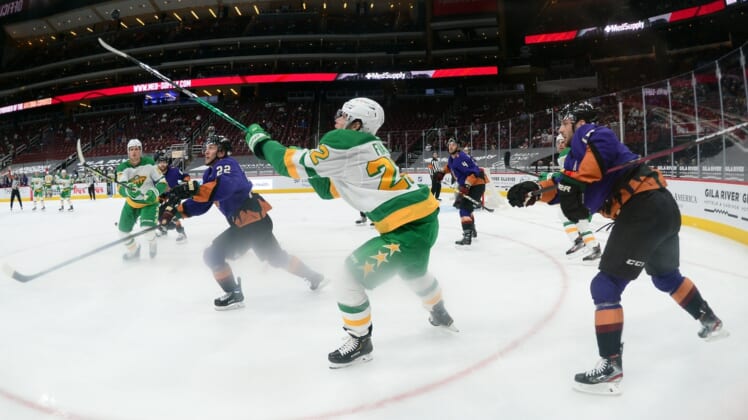 After finishing a four-game road trip and a stretch that saw them play nine of 11 games away from home, the Minnesota Wild open a five-game homestand on Monday night with the first game of a back-to-back against the West Division-leading Vegas Golden Knights.

It will mark just the third time since Jan. 31 that the Wild, who had a 14-day pause due to COVID-19 protocols at the start of February, will be playing on their home ice at Xcel Energy Center in Saint Paul. It begins a span that will see Minnesota play eight of 10 games at home.

Minnesota swept its only two home games over the past five weeks, defeating the Los Angeles Kings, 3-1 and 4-3 in overtime, in a back-to-back on Feb. 26-27 and are 5-3-0 at home this season.

The Wild went 1-2-1 in their most recent road trip which started with a disheartening 5-4 overtime loss at Vegas that saw Minnesota blow a 4-2 lead late in the third period. After another 5-1 loss to the Golden Knights, Minnesota appeared to get back on track with a dominating 5-1 victory at Arizona on Friday but ended the trip with a thud, blowing an early 2-0 lead in an eventual 5-2 loss on Saturday night.

Wild coach Dean Evason hinted afterward that his team simply ran out of gas after spending so much time on the road while also playing six games over nine days.

“We didn’t have the physical energy, the emotional energy that we’ve seen (lately) from our group,” Evason said. “When they got back into it, we never had that pushback and that life.

“We’ll rest up and play. Everybody is doing it, so we have to find a way. … When you’re up two goals, regardless of the energy level or not, the game should not be that lopsided after you get up two goals.”

“Back-to-backs are always will over skill,” Cole said. “And tonight, I think we maybe tried to skill our way through it. Didn’t have enough will and it’s one of those things that we need to look at. Obviously, it’s not good enough, understand that, and be better next game.”

One big problem the Wild need to fix is their power play. Minnesota ranks last in the NHL in that category having converted just five of 72 chances (6.9 percent).

The Wild begin the homestand against a Vegas team that holds a two-point lead over St. Louis in the West with four games in hand and has won six games in a row, the longest current winning streak in the league.

The Golden Knights will be playing the third game of a six-game road trip that began with an impressive sweep of the San Jose Sharks capped by a 4-0 victory on Saturday night as Marc-Andre Fleury, starting for the 11th time in 12 games following a rare night off, stopped 24 shots for his 65th career shutout. Alex Tuch scored twice to give him eight goals over the last seven games.

Vegas won the first game of the back-to-back, 5-4, on a Max Pacioretty goal in overtime on Friday night.

The Golden Knights improved to 11-1-3 all-time in regular-season games against the Sharks with the sweep, which caused center Jonathan Marchessault to throw a little postgame shade San Jose’s way after Saturday night’s win.

“We used to have a pretty good rivalry,” Marchessault said drawing a chuckle from Fleury seated nearby. “Now it’s not as powerful as it was the first two years. It’s always good to get a win. We just came here and took care of business. … Our game is pretty strong right now.”