PREVIEW: Minnesota Wild aim to get back on track vs. Arizona Coyotes 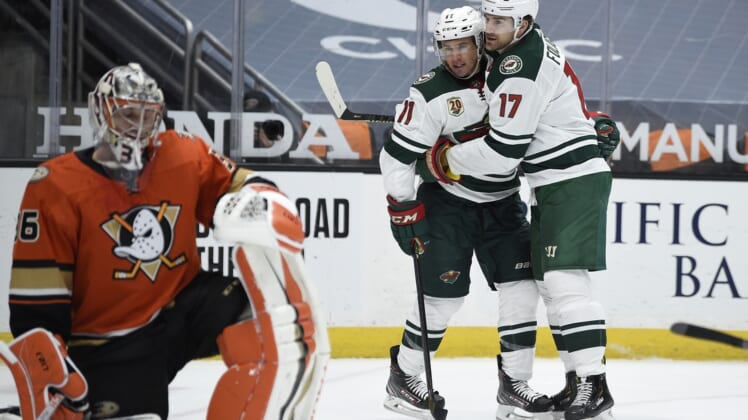 A fourth consecutive road win has the Arizona Coyotes believing they are back on track. The key will be to find that same success at home.

As the Coyotes ready to play host to the Minnesota Wild on Friday — the first of two consecutive games between the clubs in Glendale, Ariz. — it’s an opportunity to put aside their home-ice struggles. Arizona dropped two straight home games to Colorado before netting a 3-2 road win over the Los Angeles Kings on Wednesday and is 6-6-3 at home.

“On the road, especially when there’s fans, you try to simplify it a little bit and get it in behind them a little more,” said forward Nick Schmaltz, whose second-period goal Wednesday was the go-ahead tally. “We always play hard on the road. I don’t know what it is. We’ve got to try to bring it back home and make Arizona a tough barn to play in.”

This is the first of eight meetings from Friday until April 21 between the Wild and Coyotes. Five of those will be completed by March 16.

The Coyotes defeated Los Angeles with a textbook performance out of their game plan. They opened the scoring, added a pair of quick goals to make it a 3-1 edge and then held on defensively while the Kings pushed for an equalizer — outshooting the Coyotes 18-4 in the third period. Goaltender Antti Raanta provided a 40-save performance to shut the door.

“I liked some of our game early,” coach Rick Tocchet said. “And then in the third period we were just hanging on. I didn’t like our third, but it’s a good win. We’ll take the win.”

The Wild arrive in Arizona having lost a 5-1 clash to the Vegas Golden Knights on Wednesday. The game that was much closer than the one-sided score would indicate, as Vegas goalie Marc-Andre Fleury stopped 36 shots, including all 20 that went his way in the third period. Minnesota dropped a 5-4 overtime game in Vegas two nights earlier.

“Obviously, the outcomes of both games we wanted to be different,” captain Jared Spurgeon said. “At the same time, we’re worried about ourselves. That’s a good team over there, but we’re worried about our game and I don’t think the score really showed what the game was. I think it was a lot closer until the end there.

“I think as a group, we’ve gotta keep working and fine-tuning our game. We’ve gotta make teams react to us and not worry about them.”

Before heading to Vegas, the Wild were riding a six-game winning streak, so their confidence isn’t shaken.

“We can’t get sidetracked with these tough losses,” said winger Marcus Foligno, who scored Minnesota’s lone goal in Wednesday’s loss and has five tallies in the last six games. “We gotta understand that we’re a great hockey team.”

That mindset, they believe, will be a huge part of bouncing back into the win column.

“We did definitely like a lot of parts to our game,” said Wild coach Dean Evason, who will likely return veteran forward Zach Parise to the lineup after he was a healthy scratch. “I think end of the day, chances will be very close, if not better for us. We just didn’t finish (Wednesday), but our effort was there, and we did a lot of good things.”