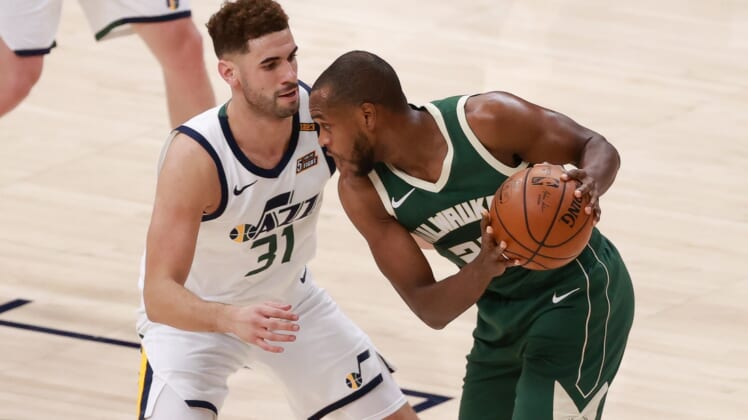 It will be a matchup of two teams out to regain their winning ways Tuesday night when the Toronto Raptors visit the Milwaukee Bucks for the opener of a two-game set.

The Bucks will be returning home for an eight-game stretch after losing their third straight game, 114-109 to the Oklahoma City Thunder on Sunday, despite the fourth triple-double of the season by Giannis Antetokounmpo, who had 24 points, 17 rebounds and 10 assists. The loss completed a 3-3 road trip for the Bucks, and the losing streak is their longest of the season.

The Bucks had their lowest-scoring half of the season Sunday when they entered the intermission down 52-41 despite a 13-3 start.

“After the first two or three minutes of the game we had a pretty ugly half,” Bucks coach Mike Budenholzer said. “We just weren’t very good.”

Milwaukee came back to take an 86-83 lead early in the fourth quarter, but Oklahoma City responded with an 11-3 run.

The Raptors were jolted Sunday by a 116-112 loss to the lowly Minnesota Timberwolves at their temporary home in Tampa. The Raptors, who lost to the Boston Celtics Thursday to complete a 4-2 trip, had defeated the Timberwolves in 16 straight home games dating to Jan. 21, 2004.

The Raptors had a chance to tie the game with 7.4 seconds left in the fourth quarter, but Pascal Siakam missed a driving layup.

“It looked like it unfolded exactly how we wanted it to,” Raptors coach Nick Nurse said. “We ran a misdirection play and cleared out that whole area for Pascal and he got right where he wanted to go, and it was just unfortunate that it just rolled off.”

“We understand that we can’t have those games given away,” said Kyle Lowry, who led the Raptors with 24 points on Sunday. “We’re three games under .500 and we could be six games over .500. It’s that small of a difference.”

These teams are used to success in recent seasons, and the Raptors defeated the Bucks in the Eastern Conference final two years ago on the way to winning the NBA championship.

After the Bucks lost Sunday, Antetokounmpo said the team needs to improve its defense late in games.

“We know our go-to plays, we know what to do down the stretch, we’re smart enough to figure it out,” Antetokounmpo said. “But we’ve got to get stops. It’s about getting stops. If you don’t get stops, you can’t win. You have got to be able, down the stretch, to get two, three stops in a row in order to be successful and win a close game. It’s not about offense. Offense is going to take care of itself. It’s about getting stops.”

Antetokounmpo had 24 points, 18 rebounds and nine assists on Jan. 27 when the Bucks defeated the Raptors 115-108 at Tampa in the first meeting of the season between the teams.

The Raptors were without OG Anunoby (left calf strain) for the 10th straight game Sunday, and he is listed as doubtful for Tuesday.

The Bucks were without Jrue Holiday Sunday for the fourth consecutive game because of COVID-19 protocols.