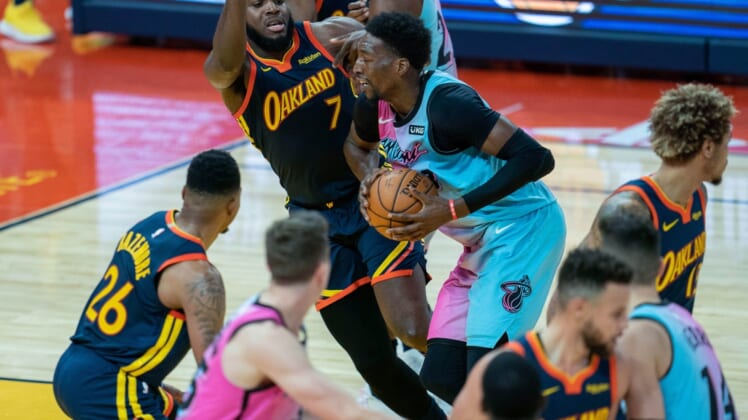 The Miami Heat will look to bounce back from a wrenching setback when they visit the Sacramento Kings on Thursday night.

Miami never trailed in regulation and let a 19-point lead get away Wednesday before falling 120-112 in overtime to the Golden State Warriors.

The Heat seemed on their way to victory when they led by 14 points with 6:40 left in regulation, but the Warriors scored 11 consecutive points and 20 of 26 to force the extra session.

“We just weren’t able to score down the stretch even though we had some open ones,” Heat coach Erik Spoelstra said. “It was a storm (of bad things) at both ends.”

The disappointing outcome leaves the Heat with three consecutive losses and a 1-3 record on their seven-game road trip. Miami is just 4-10 on the road this season as it visits a Sacramento squad that has dropped four straight games.

Bam Adebayo scored 24 points for the Heat at Golden State, and Jimmy Butler recorded 13 points, 12 rebounds and 11 assists to become the first player in Heat history with back-to-back triple-doubles.

Seven Miami players scored in double digits, but the late-game drop-off in play wasn’t new for the Heat.

Duncan Robinson, who scored 13 points, said it is a frustrating pattern that needs to change.

“We’re not making enough winning plays down the stretch of games,” Robinson said. “If you don’t do that, you’re not going to win. It’s something we need to figure out.”

The Heat edged the Kings 105-104 in Miami on Jan. 30 after losing five of the six previous meetings. Butler scored the decisive layup with 42.1 seconds left to cap a 30-point outing for the Heat. De’Aaron Fox scored 30 for Sacramento.

The Kings are struggling entering the rematch and crave a triumph to end a five-game homestand. Their defense has been missing in action, allowing an average of 125.5 points during the four-game skid.

The defensive performance was especially bad Monday during a 136-125 loss to the Brooklyn Nets, who set a franchise record by making 27 3-pointers despite the fact that Kevin Durant sat out the game with a hamstring injury.

“Unfortunate, but we knew this was going to be that type of test,” Kings coach Luke Walton said. “They’re not an easy team to stop, and as soon as we made mistakes … they turned them into 3, 3, 3 like that. Tough to beat a team when they hit 27 threes.”

Backup big man Hassan Whiteside had a superb outing with season highs of 26 points, 16 rebounds and five blocked shots in just 24 minutes. He became the first Sacramento player to log at least 25 points, 15 boards and five rejections in a game since Chris Webber in January 2001.

Bagley said that the Kings’ play fluctuates when the team is going through a dry spell. This is Sacramento’s second four-game slide of the season.

“When we’re winning, we’re getting stops, playing together, moving the ball, getting a lot of assists, making the right defensive reads, playing together, having fun, trusting each other,” Bagley said, “but in stretches like this, we kind of go away from those things.”

Sacramento’s Harrison Barnes (foot) will miss the Thursday contest, but teammate Richaun Holmes (knee) might sit out a second consecutive game. Miami’s Goran Dragic (ankle) will be sidelined for the seventh straight contest.