PREVIEW: Miami Heat out to buck odds, rally from 3-0 down vs. Milwaukee Bucks

The Miami Heat aren’t just trying to avoid a sweep.

They are trying to regain their mojo.

The Heat trail the Milwaukee Bucks 3-0 in their best-of-seven, first-round NBA playoff series, and they’re facing elimination on Saturday afternoon in Miami.

“Our rhythm is off,” Heat guard Goran Dragic said. “It’s way off. We lose our confidence.”

It’s a stunning admission by one of the veteran leaders of a franchise that reached the NBA Finals just last year. They have eliminated the Bucks the only two times they have faced each other in the playoffs, including last year in the Eastern Conference semifinals.

This year, though, has been vastly different. After surviving the opener thanks to Khris Middleton’s game-winning shot in overtime, Milwaukee has ripped through the Heat defense the past two games, winning by a total of 63 points.

Miami led Games 2 and 3 by a combined total of 17 seconds.

Counting the regular season, the Heat have lost three games this season by at least 29 points, and all three have come against the Bucks, including two in this series.

The Bucks have held leads of 51, 36 and 32 points in three different games against the Heat this season.

Miami’s offense has struggled this series, and that’s being charitable. The Heat are averaging just 93.2 points per 100 possessions in this series, which is on pace to be the lowest for any NBA playoff team since the Memphis Grizzlies in 2016. 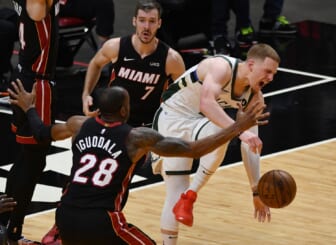 The Heat have been bothered by Milwaukee’s length, particularly 7-footer Brook Lopez and 6-11 Giannis Antetokounmpo, and that was evident in the Bucks’ 113-84 win over Miami on Thursday. In that game, the Heat shot just 2-for-8 in the paint when Lopez was the primary rim protector, according to ESPN Stats & Information.

And, unlike in last year’s playoff matchup between Miami and Milwaukee, which the Heat won in five games, Antetokounmpo is guarding Jimmy Butler. The Miami star has seen his scoring average dip from 21.5 in the regular season to 15.3 in this series.

The only negative for the Bucks has been the loss of starting guard Donte DiVincenzo, who left Thursday’s game with 10:05 left in the second quarter and did not return due to a contusion in his left foot. The Athletic reported Friday that he has a serious tendon injury and will miss the rest of the playoffs.

Now, the Bucks will be especially grateful they acquired Jrue Holiday in a four-team trade this past offseason.

Holiday is averaging 16.7 points, 10 assists and seven rebounds in this series.

Bucks forward P.J. Tucker said the quietest teammate he has ever played with is Holiday, who also is one of the best.

No NBA team has ever come back to win a playoff series after trailing 3-0. Then again, the Heat haven’t been swept in the playoffs since 2007 against the Chicago Bulls.

None of that is a concern, according to Butler.

“We’re not worried about history and all that good stuff,” Butler said. “We’ve got to figure out ways to be better. We’ve got to pick who we want to be — physical. Make things tougher on them and then live with the result.”