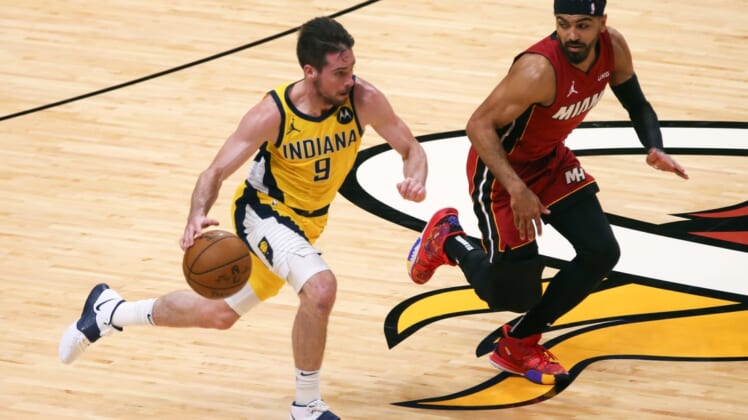 Nobody asked the question, although Miami Heat coach Erik Spoelstra was quick with the answer.

“T.J. McConnell was the player of the game,” Spoelstra said of the Indiana Pacers’ reserve point guard. “If you count loose balls and deflections, he had a triple-double.”

Officially, McConnell had 16 points, a season-high-tying 15 assists and three steals in the Pacers’ 137-110 rout of the Heat on Friday night.

The Heat, who will host the Pacers again on Sunday afternoon, will have to be much sharper if they plan on winning the rematch.

“We weren’t as active or disruptive as we normally are,” Spoelstra said of the Heat’s leaky defense on Friday. “(The Pacers) were running it down our throats, and we weren’t able to get our defense set. The entire game was played on Indiana’s terms.”

McConnell, who played 29 minutes, was brilliant with game highs in assists, steals and plus-minus (plus-26). His 15 assists are the most by any Heat opponent this season.

The Pacers also received a game-high 27 points from Malcolm Brogdon, who made 10 of 12 shots — including 7 of 9 attempts from 3-point range.

In addition, the Pacers got a boost from Jeremy Lamb, who scored 12 points in his return from missing three games due to a sore left knee.

“We have to keep our foot on the gas,” Brogdon said after the Pacers set a franchise record for most points against the Heat. “We can’t expect for the next game to go exactly like this.

“It’s going to be a different game and a different story. But we have to continue to do the things we did (Friday).”

If there was anything for which Miami to build off in Friday’s game, it was the Heat’s aggressiveness. The Heat outscored the Pacers in the paint (64-60) and at the foul line (19-13).

The Heat also held 2021 All-Star Domantas Sabonis to 13 points — seven below his average — and Myles Turner to 12 points, which is one below his norm.

The game marked the Heat debut of Trevor Ariza, who was acquired in a trade with Oklahoma City on Wednesday. Ariza, 35, played six minutes off the bench and did not score.

“We would’ve liked to have a better team performance on the night Trevor made his debut,” Spoelstra said of Ariza.

“But Trevor has the experience to fit in because he has played in a lot of different systems. He has played a lot of winning basketball.”

The Heat have now lost consecutive games for the first time since dropping three in a row from Feb. 13-17, but Miami center Bam Adebayo isn’t concerned.

The Heat won all four regular-season meetings against the Pacers in 2019-20 before recording a four-game sweep of Indiana in the first round of the playoffs.

The Pacers are hoping Friday is the start of a turnaround.