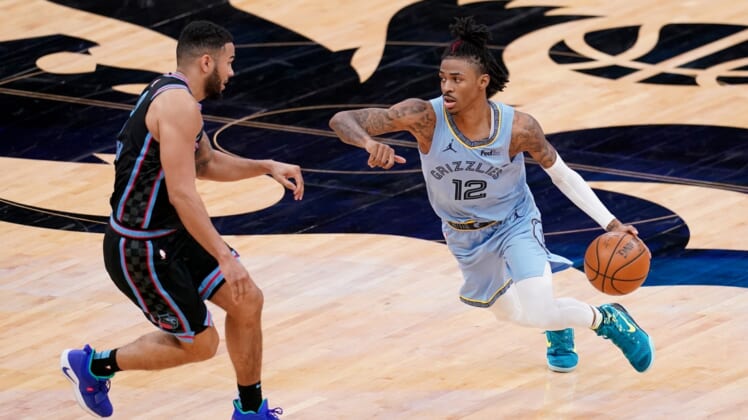 Taylor Jenkins likes the way his starting lineup is jelling. The Memphis Grizzlies coach hopes that chemistry will lead to a winning streak.

Memphis bounced back from a 31-point loss to New Orleans on Tuesday with a 122-113 victory over Oklahoma City on Wednesday. The Grizzlies entertain the Detroit Pistons on Friday.

All of Memphis’ starters scored at least 15 points on Wednesday. Center Jonas Valanciunas and wing Grayson Allen had 22 points apiece. Power forward Kyle Anderson had 20 points and sparked the defense with five steals.

Shooting guard Dillon Brooks had 17 points, and second-year point guard Ja Morant recorded his third career triple-double with 15 points,12 assists and 11 rebounds. Morant shot just 4-for-14 from the field but contributed in other areas.

“I’m always looking to share the ball,” Morant said. “Obviously, I was missing some bunnies, but I just kept playing. As far as the rebounds go, just being able to help our guys. Once we get stops and rebound, we get out and run. If I get it, I’m already looking to push ahead.”

Morant has nine or more assists in six of his last seven games — he had eight dimes in the other game — and having a set lineup has contributed to that.

“We’ve had to change things up over the course of the year but now that we’ve gone back to it, that lineup puts these guys in really good spots,” Jenkins said. “These guys are complementary to each other — different playmaking, different shooting abilities, the positional versatility. It’s good that this group is finding some groove.”

Detroit swept the two-game series with Memphis two seasons ago, but the Grizzlies captured both meetings last season. Memphis won in Detroit 125-112 behind 27 points from Brooks, then took the rematch in Memphis 96-82 as Valanciunas collected 26 points and 17 rebounds.

The Pistons wasted a career-high 43 points from Jerami Grant on Wednesday, falling to Chicago 105-102 even after building a 25-point lead in the first half. Detroit was supposed to begin a five-game road trip that night in Dallas but complications due to severe weather in Texas forced a postponement. The Bulls also had a postponement on Wednesday, and the NBA quickly arranged to have the Central Division rivals meet.

Chicago scored the last six points of the first half and outscored the Pistons 27-12 in the third quarter to erase Detroit’s big lead.

“Winning matters over personal play,” Grant said. “I think we could’ve done a better job in the third quarter. We gave up the lead and down the stretch and we missed a couple of shots we normally make.”

Coach Dwane Casey was disappointed by the way his Pistons eased up after its strong start.

“The one thing we can do better — all of us — is to play with more force,” Casey said. “The same energy you played with in the first half, you’ve got to close the second quarter and start the third quarter with the same energy. You can’t say, ‘We’ve got a 17-, 18-point lead; we can exhale a little bit.’ No, no. That’s when you really put your foot down, set the tone and make them call the first timeout.”