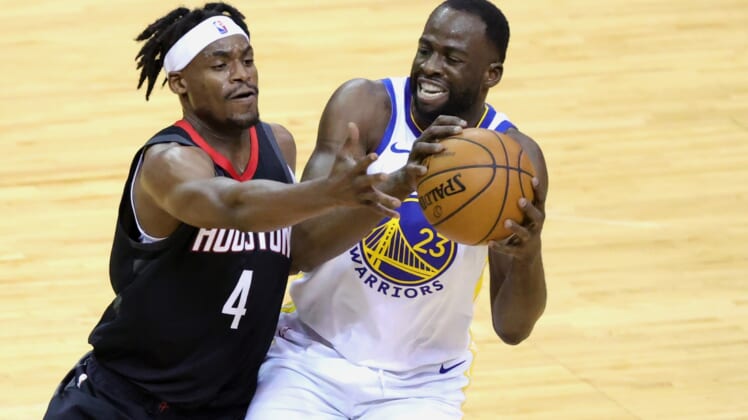 The visiting Golden State Warriors hope to have Stephen Curry and Kelly Oubre Jr. when they play the Memphis Grizzlies on Saturday night.

The problem is that the teams also square off Friday night.

Curry and Oubre were unable to practice Thursday after suffering injuries in Wednesday’s 108-94 victory at Houston.

Curry, who had 18 points in 30 minutes, fell off the side of the court late in the third quarter and bruised his tailbone. He was unable to return to the game.

Meanwhile, Oubre was able to make it through nearly 36 minutes and scored 19 points before reporting soreness in his foot — the result of having gotten kicked during the game.

Neither has been formally ruled out for Friday’s first game of the NBA-style doubleheader, but Warriors coach Steve Kerr wasn’t confident either would be ready to go. Getting a night off and returning Saturday was being considered as an option.

The Warriors know this for sure: They won’t have James Wiseman and Eric Paschall for either game. Both will be out at least a week due to COVID-19-related contact tracing.

In Wiseman’s case, it means missing both his homecoming games this year at Memphis, where he played high school ball and then an aborted three-game college career last season.

If there’s good news for the Warriors, they will enter the series against their fellow Western Conference playoff hopeful with Jordan Poole playing the best basketball of his NBA career.

Poole, who starred for the Warriors’ G League affiliate in the bubble last month, has exploded back onto the NBA scene with a 19.0-point scoring average in five games. He had a team-high 23 points in the win at Houston.

Asked to explain the difference in his teammate, Warriors veteran Draymond Green responded: “His confidence. Shooting the ball with a lot of confidence. Making quick decisions. He’s just overall better.”

The win at Houston kept Golden State, at 21-20, one game ahead of Memphis (18-19) in their duel for playoff position.

The Grizzlies failed to make up much ground on Golden State during its skid, losing three in a row before rebounding to edge Miami 89-85 on Wednesday in the opener of a four-game homestand.

The well-balanced Grizzlies beat the Heat despite not having a single player score more than 13 points. They did it by getting five or more points from all 10 players who saw action, led by 13 apiece from Ja Morant, Kyle Anderson and De’Anthony Melton.

Morant broke an 85-all tie with a length-of-the-court drive to a layup with 8.6 seconds remaining.

“In the fourth, he turns it up,” Melton gushed afterward. “We don’t have to worry about none of that. We got us. He’s got us. When the ball is in his hands, we good.”

The Warriors and Grizzlies haven’t met this season. Memphis won two of three last season, when Golden State had trouble dealing with Jonas Valanciunas, who averaged 22.0 points and 14.5 rebounds, shooting 74 percent, in the two wins.