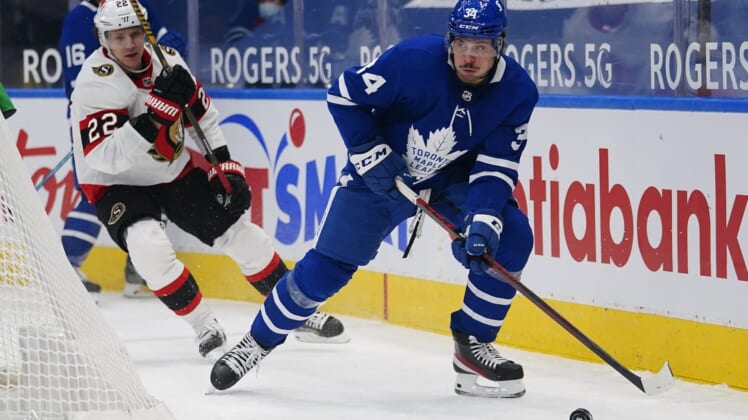 After playing a high-scoring game followed by a relatively tame affair, the visiting Ottawa Senators and the Toronto Maple Leafs meet in the rubber match of a three-game series Thursday night.

The Maple Leafs squared the series with a 2-1 victory Wednesday night on a third-period goal by Alexander Kerfoot.

The Senators overcame a four-goal deficit Monday night to win the opener 6-5 in overtime. The teams have split four games this season.

The victory Monday gave the Senators two wins in a row for the first time this season. The Maple Leafs had lost two in a row before Wednesday.

Ottawa’s No. 1 goaltender, Matt Murray, returned Wednesday after he missed two games and part of a third with a neck strain. He made 26 saves.

Marcus Hogberg started in goal in the previous two games, winning both.

Senators defenseman Erik Brannstrom, who missed four games with an unspecified injury, played 14 minutes in his return to the lineup Wednesday.

Auston Matthews scored for Toronto in the second period Wednesday, giving him a team-high 14 on the season. He has registered four goals and two assists in four games against the Senators this season and has 28 points (17 goals, 11 assists) in 19 career games against them.

“I really liked our second and third periods,” Matthews said. “They didn’t play the same way they did last game. We had a lot of space, we were flying through the neutral zone and the offensive zone and stuff like that. That came pretty easily to us.

“(Wednesday) they did a much better job. Playing the way they really typically play, which is just clogging stuff up and making it difficult on you. I thought in that first period they did a good job. We responded well in that second and third.”

Brady Tkachuk scored his fifth goal of the season for Ottawa, leveling the score late in the second period. He has three goals and seven assists in 10 career games against Toronto.

“I thought it was a very good game,” Senators coach D.J. Smith said. “The chances were probably even, we got into some penalty trouble and we didn’t make some plays in the third we should have made and we got hemmed in our zone.

“I thought we did a lot of great things. We broke the puck out well, we skated, we had our chances and they won tonight, but it could have gone either way.”

Maple Leafs goaltender Frederik Andersen made 27 saves while starting for the 10th game in a row. It had not been decided after the game if Michael Hutchinson might get the start in his place Thursday.

“Fred was really solid today,” Maple Leafs coach Sheldon Keefe said. “Lots of activity in and around him. Lots of traffic. A lot of pucks flying around. I thought he definitely handled it well, did his job and gave us a chance to win.

“As for (Thursday), with both him and the goaltending position and a lot of other situations with our team, we’re going to give it the night and make some decisions (Thursday). Some of them likely won’t be until game time.”

Andersen said, “I was happy the way we came back and answered after that last game. We got a point out of it (Wednesday) so overall a pretty cheap lesson, but we had a good day (Tuesday) and tried to clean up some things.”