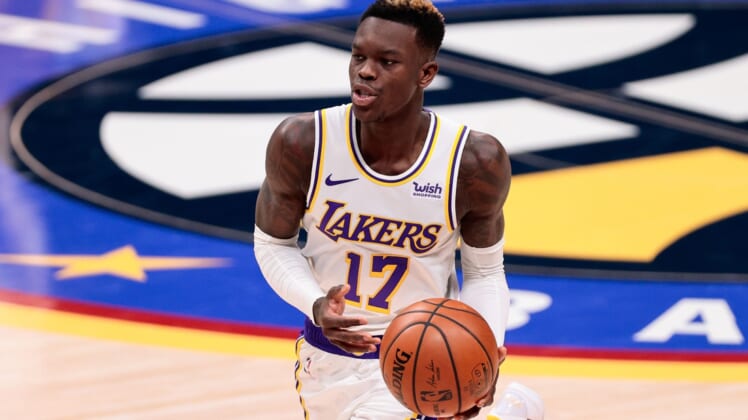 The Los Angeles Lakers aren’t the same club without Dennis Schroder in the lineup.

That was evident when the Lakers lost all four games Schroder missed due to the NBA’s health and safety protocols before they ended the skid Friday in a 102-93 win over the Portland Trail Blazers.

Schroder is expected to be in the mix again when the Lakers host the Golden State Warriors on Sunday.

Against the Blazers, Schroder made his presence felt on both ends of the court. He scored 22 points and helped slow Portland’s Damian Lillard, who managed 11 points in the second half after scoring 24 in the first.

Schroder and James also contributed to the Lakers limiting the Blazers to 38.6 percent shooting. James was particularly effective with four steals and three blocks.

“Just trying to do whatever it takes to help us get off this losing streak,” James said. “But that’s always been my game, to be able to play both ends of the floor and hold myself accountable and be there for teammates.

“Tonight was an instance where I was able to get some steals and some blocks, took a couple of charges and just trying to be the voice and also act on action on the defensive end.”

A third-quarter spurt boosted the Lakers and allowed them to wipe out a three-point deficit at the break and turn it into an 85-76 advantage heading into the fourth quarter.

Stephen Curry had 29 points and nine assists and Kelly Oubre Jr. added 27 points on 11-of-15 shooting in the Warriors’ 130-121 victory over the Charlotte Hornets on Friday. Draymond Green had a solid outing with a career-high 19 assists and 12 rebounds to go along with 11 points as Golden State posted its third straight victory.

Green credited his teammates with helping him achieve the assists mark.

“It means my teammates are playing well and it means we’re playing better,” Green said. “I think early on in the year, there were things I would see that other guys weren’t seeing. But with the repetitions, with the time together, guys are starting to see that.”

Green focused on redeeming himself after drawing two technical fouls late in the game that cost Golden State in a 102-100 loss to the Hornets on Feb. 20.

“I wouldn’t necessarily (call it) a revenge game,” he said of Friday’s contest. “A revenge game would be a bit of a stretch, I would say. It was about me coming out and making it right. Trying to do whatever I can to help this team get a win. Can’t just forget about what happened last week.”

The Warriors rallied from a 14-point, fourth-quarter deficit to beat the Lakers 115-113 on Jan. 18 in Los Angeles. Curry had 26 points and seven assists and Oubre scored 23.

Schroder led the Lakers with 25 points in defeat. James, who finished with 19 points, missed a game-winning 3-pointer at the final horn.