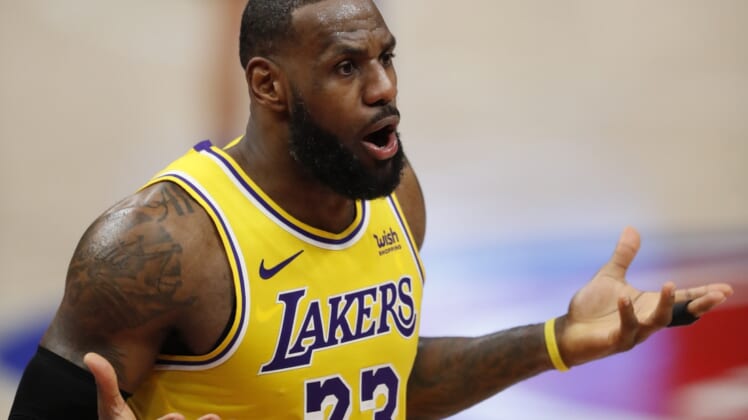 With two games still remaining on their demanding seven-game road trip, the Los Angeles Lakers were forced to reassess their standing after a disappointing loss to the Detroit Pistons on Thursday.

“You have nights like this in a long season. We’ll be fine,” coach Frank Vogel said in the aftermath of the 107-92 defeat, the team’s second straight. “None of us are happy with how we played tonight, but we’ll bounce back.”

Bouncing back will be no easy task as the Lakers visit the Boston Celtics in a primetime matchup Saturday night on network television. The longtime rivals have played three games decided by two points or less in the past three seasons, although Boston has won six of the last nine meetings.

The Celtics enter off a setback of their own, failing to beat the San Antonio Spurs on Wednesday after coming back from as much as 15 points down. Boston was up 101-99 with less than two minutes remaining but couldn’t hold on in the 110-106 loss.

“Obviously people know what we’re capable of on the defensive end, but we just gotta figure it out,” said forward Jayson Tatum, who had 25 points in the game. “We’ve got more than enough guys that are elite defenders.

“That’s kind of what we hang our hat on being on the Celtics – competing and defending. And honestly, we’re just not doing that right now, so we’ve got to figure it out.”

Overall, Boston has dropped four of its last six games. The team’s projected starting five played together for the first time this season Wednesday after Tatum missed a handful of games earlier this month with COVID-19.

“It’s been an interesting season,” said swingman Jaylen Brown, whose 27.1 points per game average leads the team. “We’ve had guys out, guys hurt. We are just trying to put everything together. Tonight wasn’t our best night.”

Players on the Lakers were singing the same tune Thursday. In the loss to Detroit, Los Angeles scored just 34 points in the second half. LeBron James and Kyle Kuzma paced Los Angeles with 22 points apiece, but the absence of Anthony Davis (bruised right quad) loomed large.

“We got to keep our minds fresh, keep our bodies fresh as much as we can to go out there and put together a complete 48-minute game, or close to 48 minutes,” James said. “Obviously we haven’t done it the last couple of games, and we just got to be better on Saturday.”

After their game against the Celtics, the Lakers will complete their road trip at Atlanta on Monday before returning home for five straight. Boston, on the other hand, will hit the road for a five-game West Coast swing that begins Tuesday at Golden State.

By winning the NBA Finals last season, the Lakers matched the Celtics for most titles in league history at 17. The clubs last met in the Finals in 2010, with Los Angeles coming out victorious in seven games.