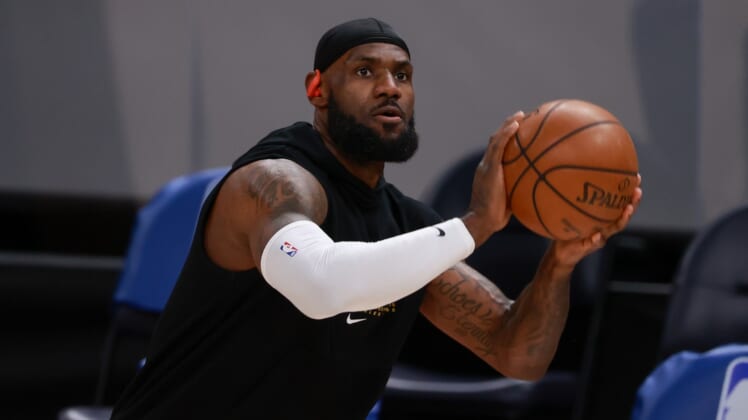 The Los Angeles Lakers will attempt to put LeBron James’ injury behind them when they visit the Phoenix Suns on Sunday night in a nationally televised affair with first place in the Pacific Division at stake.

James injured his right ankle in a collision with Atlanta’s Solomon Hill in the second quarter of a 99-94 home loss to the Hawks on Saturday afternoon. James will be out indefinitely.

After shouting in pain and prompting the Lakers to call a timeout in the second minute of the second period, James was able to remain in the game long enough to hit a 3-pointer that gave him 10 points and extended his streak of double-figure scoring games to 1,036.

The Lakers called another timeout on their next possession and James was pulled from the game for good. He was scheduled for an MRI later Saturday after initial X-rays were negative and has been diagnosed with a high ankle sprain.

While most Lakers focused their postgame thoughts and comments on James, Los Angeles head coach Frank Vogel had no choice but to start preparing for the Suns.

“It’s certainly going to be a challenge any time you are undermanned,” he said. “But if you play team-first basketball and you defend at a high level, you have a chance to win. That’ll be our mindset.”

James has missed just one game this season when he sat out a 123-120 loss at Sacramento in the final game before the All-Star break.

As they embark on a three-day, two-game trip that concludes Tuesday in New Orleans, the Lakers also are without Anthony Davis (strained right calf). Out as well is Marc Gasol, who has rejoined the team after being in COVID protocol but has yet to return to game shape.

Saturday’s loss, which snapped a four-game winning streak, dropped the Lakers (28-14) percentage points behind the Suns (27-13) in the division as the clubs prepare to meet for a second time this season.

The Suns have alternated wins and losses in their last five games, the two defeats dropping them temporarily below the Lakers in the Pacific until Los Angeles lost on Saturday.

The Suns’ inconsistency of late included a split with Minnesota in a two-game home series Thursday and Friday.

Chris Paul credited the ejection of Suns coach Monte Williams for waking up the club on the verge of a second straight loss to the team with the worst record in the West.

The Suns enter the game in great shape physically. Cameron Johnson, who like the Lakers’ Gasol had a lengthy COVID-related absence, is trying to work his way back into form. He is considered questionable.

The Suns and Lakers are also scheduled to meet one more time — May 9 in Los Angeles.