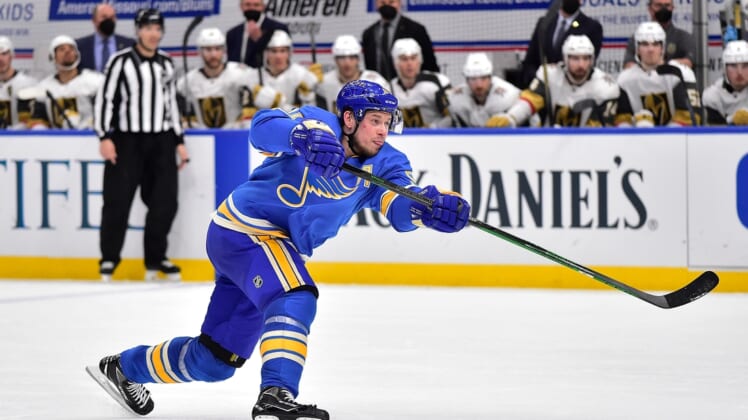 The Los Angeles Kings had to wait longer than expected before opening their homestand Wednesday night against the St. Louis Blues.

Los Angeles was scheduled to face the Blues on Monday, but that game had to be postponed because the Kings were stranded in Denver by a massive snowstorm Sunday following their 4-1 loss to the Colorado Avalanche.

Monday’s game has yet to be rescheduled, but in Wednesday night’s matchup, both teams figure to be eager to turn around their recent fortunes.

“There’s still some things we have to improve on,” Kings coach Todd McLellan said.

The Kings lost both their games in Denver last weekend to fall to 2-4-3 in their past nine games.

The skid has prevented Los Angeles from making up ground on the Blues for fourth place in the West Division. St. Louis is amid a season-long four-game losing streak, although three of those losses came in overtime.

“We don’t have enough guys pulling on the same rope,” St. Louis coach Craig Berube said after a 5-1 loss to the visiting Vegas Golden Knights on Saturday. “We need everybody in the lineup to do the right things and pull on the same rope, but right now, we don’t.”

Los Angeles enters the game five points behind the Blues with a game in hand. The Kings have played well against St. Louis thus far this season, owning a 4-1-1 mark, including the teams splitting two overtime decisions just 10 days ago in Los Angeles.

Getting back on the road for a five-game trip might help St. Louis get back on track.

St. Louis has the best road record in the West Division this season at 10-2-2. The Blues have earned at least one point in 11 of their past 12 road games, going 4-0-2 on their most recent trip.

“We’ve got to get back to what we just did on the road,” St. Louis forward Brayden Schenn said.

The Kings played without leading goal scorer Dustin Brown in the loss on Sunday. Brown is day to day with an upper-body injury. His continued absence would leave a big hole on the power play for Los Angeles, as he’s scored a team-high seven goals with the man advantage this season.

Kings goalie Jonathan Quick (upper-body) also would have been unavailable for Monday’s game, but the Kings did not practice on Tuesday and his status for Wednesday is undetermined.

Injuries have been a big obstacle for the Blues this season as well, but they’re beginning to get players back.

Tarasenko has four points in four games since his return.

“Every other team is battling, whether it’s COVID or injuries, or whatever this year,” St. Louis defenseman Justin Faulk said. “It’s tough. No one feels sorry for us.”