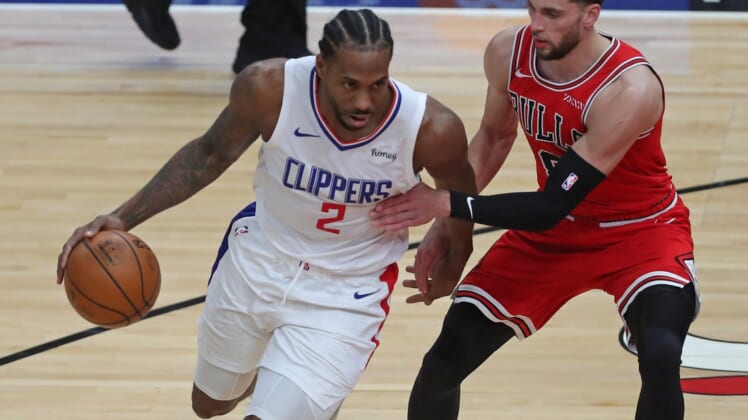 With Paul George out with a foot injury, the Los Angeles Clippers have looked to Kawhi Leonard for more production.

“He has to be more aggressive on the offensive end when Paul is not out there, especially with how this team is built,” said Lou Williams, who had 17 points and five assists in the Clippers’ 125-106 win over the Chicago Bulls on Friday, according to the Los Angeles Times. “We have some primary scorers, we understand our roles, and once the second-leading scorer goes out, for you to be the first-leading scorer, you got to close that gap,” said Williams.

Leonard and the Clippers open a six-game homestand on Sunday against the Cleveland Cavaliers.

Against the Bulls, Leonard scored 16 of his 33 points in the third quarter and helped the Clippers turn a four-point edge at the break into a 12-point advantage entering the fourth quarter. Overall, he connected on 14 of 21 shots from the floor and also grabbed six rebounds.

Friday’s performance occurred after Leonard had a season-high 36 points with eight boards in a 119-112 victory over the host Minnesota Timberwolves on Wednesday. Leonard is averaging 29.3 points — slightly above his 26.7 average this season — in the four games George has missed.

“Kawhi, when he gets it going, it’s hard to stop him,” said Clippers center Ivica Zubac, who scored 12 points against the Bulls.

Marcus Morris Sr. scored 15 of his 20 points in the fourth quarter. Morris converted 6 of 8 3-pointers overall, five of them coming in the fourth.

The Cavaliers are enduring a rough stretch. They lost their sixth in a row in a 129-110 setback at the Portland Trail Blazers on Friday.

Cleveland’s Collin Sexton had 25 points and five assists and Jarrett Allen contributed 22 points and six rebounds off the bench. Darius Garland chipped in 17 points, but the Cavaliers’ frustrations continued.

“We understand that winning isn’t easy, but we have to make sure to continue to stay upbeat,” said Sexton, who is averaging 22.7 points per game this season. “We all have a feeling where we are just pretty much tired of losing, and now we got to do something about it.

The Blazers roared to a 22-4 start before the Cavaliers closed the gap to 34-23 at the end of the first quarter. However, Portland resumed being the aggressor in the second quarter and led 73-52 at the break.

The Clippers pounded the Cavaliers 121-99 on Feb. 3 at Cleveland. George scored 36 points and Leonard finished with 24. Sexton had 27 points.

Cleveland is 3-10 on the road, losing seven straight.