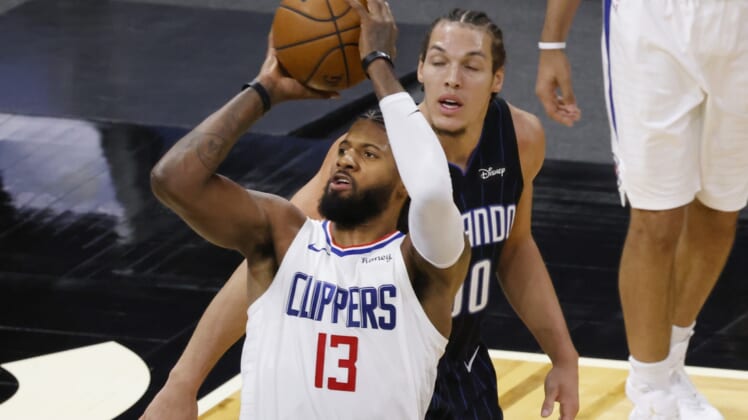 The Los Angeles Clippers and Brooklyn Nets possess plenty of stars and an abundance of offense. It is defensively where the differences lie between the teams.

The Clippers seek a fourth straight win and 11th in 12 games Tuesday night when their six-game road trip continues with a visit to the Nets, who are coming off one of their worst defensive showings of the season.

“I think everyone is looking forward to that matchup, this ball club, and the world,” Los Angeles star Paul George said. “Should be a great showdown.”

Los Angeles enters the nationally televised matchup with 16 wins in the first 21 games and is surging since starting 6-4. The Clippers are scoring 118.5 points in their past 11 games and allowing 104.4.

On Sunday the Clippers continued to roll when they posted a 129-115 win over the New York Knicks, who lead the NBA in scoring defense. The Clippers posted their sixth double-digit win of this stretch and equaled their third-highest point total of the season.

Kawhi Leonard scored 28 points and is averaging 29.8 points in his last five games since being held to 17 on Jan. 17 against Indiana. Leonard’s latest big day came on a day the Clippers shot 54.3 percent, marking the seventh time they shot at least 50 percent this season.

“We share the ball, we move it, we look for the open man and we emphasize passing up good shots for great ones,” George said. ” I think we’re doing a great job at that. We’re shooting them expecting to make them, and when we’re shooting great ones, we’re expecting to really hit them.”

Los Angeles recorded its latest win while playing without two starters. Patrick Beverley missed his fourth straight game with a sore right knee while Nicolas Batum was out with a left groin contusion.

Both may miss Tuesday’s game, meaning Patrick Patterson would start for Batum and Reggie Jackson would replace Beverley.

The Nets have ascended near the top of the East by winning six of nine games since acquiring James Harden to join forces with Kyrie Irving and Kevin Durant. The trio has displayed more than enough offense as the Nets are averaging 127.3 since Harden’s debut on Jan. 16, but their defense is allowing 124.6 points.

On Sunday, the Nets took a stunning 149-146 loss at Washington after allowing 3-pointers by Bradley Beal and Russell Westbrook in the final seconds. Westbrook’s 3-pointer marked only the second time the Nets trailed and came after an errant inbounds pass by Joe Harris.

The Nets allowed the Wizards to shoot 51.9 percent, the second-highest opposing field goal percentage allowed by Brooklyn this season. The Nets also allowed 108 shots, representing a season-high for a regulation game.

Kevin Durant scored 37 points while Harris matched his career high with 30 points and Kyrie Irving finished with 26, but the Nets allowed 48 points in the fourth quarter and could not expand on an early 18-point lead.

“We had that game,” Irving said after the Nets fell to 9-2 when shooting at least 50 percent. “It should’ve been ours. So we just look at ourselves in the mirror and see what we can correct as individuals and as a group, especially on effort. I couldn’t guard a stick today.”

The Nets played Sunday without Harden, who missed his first game with a left thigh contusion. The injury does not appear serious and Harden is expected to play Tuesday.