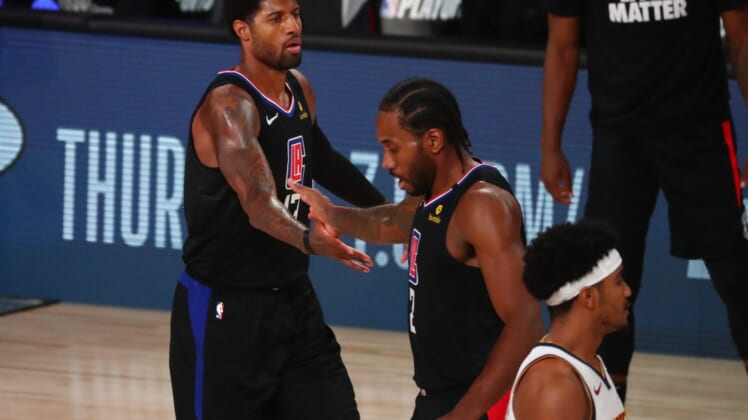 The Los Angeles Clippers definitely got their stars back Friday night. The New York Knicks would be content to look back upon Friday as the night Immanuel Quickley continued emerging as a franchise-caliber player.

The Clippers and Knicks will each look to build off encouraging wins on Sunday afternoon, when Los Angeles is scheduled to visit New York in a nonconference matchup.

Kawhi Leonard and Paul George returned from missing two games due to coronavirus protocols Friday night, when they combined to score 50 points as the Clippers cruised to a 116-90 win over the host Orlando Magic. Quickley had another big game off the bench as he scored 25 points to spark the Knicks, who overcame a 10-point first quarter deficit to earn a 102-81 win over the visiting Cleveland Cavaliers.

The Clippers went 1-1 without Leonard and George, who helped fuel a seven-game winning streak that ended during their first game on the sidelines Tuesday, when Los Angeles fell to the Atlanta Hawks, 108-99.

“It was a bummer because we were on a good roll and me and ‘PG’ go out,” Leonard said Friday night. “That’s my mindset around it. Just want to play basketball and wanting to keep building on our chemistry and get better. But understand what the protocols are and it was a chance for guys to step up and play a bigger role.”

The Clippers had six players score in double figures in a 109-105 win over the Miami Heat on Thursday night. With Leonard and George back Friday, no one played 29 minutes in the lopsided victory over the Magic.

“I think on a night when guys were a little tired, just having their presence was big for us,” Clippers head coach Tyronn Lue said. “It was huge. Just making plays for everybody else, making the game easy.”

Quickley has established himself as a second-half playmaker off the bench for the Knicks. He scored 13 points during a decisive 28-8 run that spanned the third and fourth quarters on Friday, five nights after scoring 21 of his career-high 31 points in the fourth quarter of a 116-113 loss to the Portland Trail Blazers.

“I was just having fun,” Quickley said Friday night. “That’s all.”

Despite not starting a game yet, Quickley has scored in double figures in seven of the 16 games in which he’s played. But Knicks head coach Tom Thibodeau said he’s pleased with what is working late and is in no rush to change the role for Quickley, whom New York acquired from the Oklahoma City Thunder on Nov. 20, two days after the Thunder selected him in the first round of the draft.

“There’s always a thought with everything,” Thibodeau said. “Because someone doesn’t start — it’s not that important to me. It’s having groups that play well together. And you can always finish with the guys who give you the best chance to win the game.”

Quickley is averaging 11.6 points despite averaging just 18.5 minutes per game.