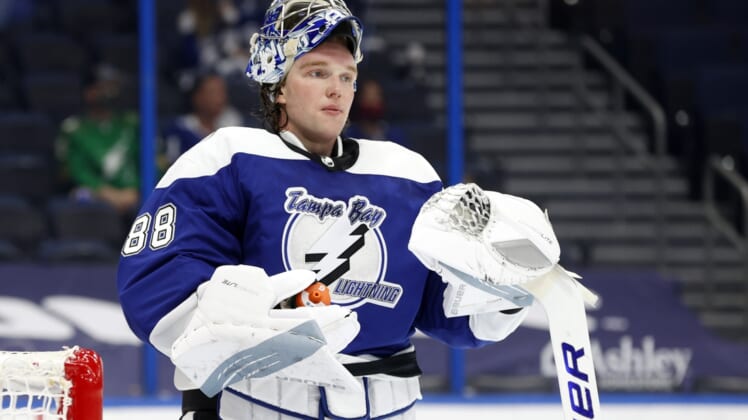 The Tampa Bay Lightning have entrusted their decade of dominance against the Chicago Blackhawks in the sure hands of goaltender Andrei Vasilevskiy.

To no one’s surprise, the 2019 Vezina Trophy winner hasn’t let it get by him.

The Russian netminder stayed perfect in his career against Chicago on Thursday, stopping 19 shots, in the Lightning’s 4-2 home win. The victory — his fifth this season against the Blackhawks — moved him to 9-0-0 against them in the regular-season play during his seven-year NHL tenure.

“Our team is playing extremely well right now,” Vasilevskiy said. “I don’t think I’ve played my best games the last two or three times. Sometimes the guys help me, sometimes I help them.”

Regardless of who is helping whom, the Lightning are getting the work done against Chicago and could turn to Vasilevskiy again when the teams wrap up their two-game set Saturday afternoon in downtown Tampa.

Since the start of the 2010-11 campaign, the reigning Stanley Cup champions have earned points in 22 of 23 games against Chicago during the regular season, producing a staggering 19-1-3 mark — the club’s best winning percentage versus any opponent in that span.

Vasilevskiy and his career-tying 10th straight win Thursday — his third time posting 10 in a row — are a vital part of the success.

The Tyumen, Russia, native became just the second goalie to record three streaks of at least 10 straight wins and the first to do it in three consecutive seasons. Hall of Famer Martin Brodeur did it four times.

His streak is the longest active one in the NHL, and he can tie Louis Domingue’s franchise record of 11 in the 2018-19 season Saturday if he gets the start.

Tampa Bay will turn around Sunday and host the in-state rival Florida Panthers in an important game at the top of the Central Division.

Yanni Gourde, who tallied for the ninth time in Thursday’s win, said Vasilevskiy’s production is grounded in hard work.

“(Andrei’s) so good at everything,” Gourde said. “He works so hard — he’s such a hard-working guy. He plays the puck very well, he’s good through traffic and makes every save look easy.

Chicago beat the beast twice Thursday on markers by Mattias Janmark and Dylan Strome, but Vasilevskiy made a number of superb saves, including a kick-save on rookie Brandon Hagel in the second period, to keep the visitors off the scoreboard over the final 40 minutes.

Dealing with concussion effects, the 24-year-old Strome returned to the lineup after an 11-game absence, played right wing on the third line with Ryan Carpenter and Janmark and scored for the fifth time.

“(There is a) lot less thinking when you’re on the wing, I find,” said Strome. “I just went out there and, when I got the puck, tried to make something happen. I was playing with a couple of great players.”

Chicago slipped to 1-5-0 in its last six games overall and 1-4-1 against the Lightning this season, and coach Jeremy Colliton said the team’s hesitancy to shoot while down a goal in the final period was a problem.

“In the third, we passed up the opportunity to shoot, to give yourself a chance to get a bounce, create some havoc,” Colliton stated.