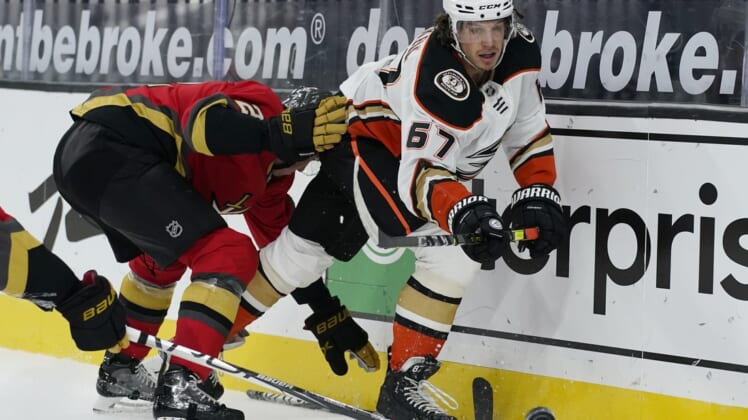 The Vegas Golden Knights, who have yet to lose in regulation at home this season, will look to try and complete a sweep of its two-game series with the Anaheim Ducks on Thursday night in Las Vegas.

Vegas improved to 7-0-1 at home with a wild 5-4 victory on Tuesday night, blowing a three-goal lead in the third period before defenseman Zach Whitecloud, with the aid of a screen by Ryan Reaves, scored the winner with 3:56 remaining on a rebound of a William Carrier shot.

It was the third straight victory for the Golden Knights, who improved to 8-1-1 overall, the best 10-game start in franchise history. The only regulation loss came at Arizona, 5-2 on Jan. 22, with the only home setback four nights later to the St. Louis Blues, 5-4 in a shootout.

It was after that loss to the Blues that the Golden Knights were forced to postpone three games and didn’t practice from Jan. 27 to Feb. 2 when three coaches and a player tested positive for COVID-19. Vegas returned to action on Feb. 5 with a 5-2 victory over the visiting Los Angeles Kings and followed that up with a 4-3 win over the Kings on Sunday.

The threat of another potential shutdown because of the virus loomed after Tuesday’s game after Vegas media availability with players and coach Peter DeBoer was hastily canceled because of COVID-19 protocols.

Vegas also canceled practice and media availability on Wednesday. The NHL released a statement Wednesday afternoon addressing the situation, which involved Knights forward Tomas Nosek. The league explained that upon notification that Nosek had tested positive for COVID-19, he was immediately removed from Tuesday night’s game and was isolated from the team.

While the game remains scheduled, “any decision regarding potential postponement will be made by the League’s, NHLPA’s and Clubs’ medical officials, following all COVID Protocols and local and federal regulations,” the NHL said in the statement.

Nosek and defenseman Shea Theodore, who left the game briefly after a first-period collision with Nicolas Deslauriers, didn’t play in the third period Tuesday.

“We feel very safe,” Eakins said. “We have great trust in the league. Until they tell us differently, we are preparing to play. The league is all over it.”

The Golden Knights and Ducks entered Tuesday night’s game with zero players on the NHL’s COVID-19 absence list. Vegas defenseman Alex Pietrangelo had been removed from that list on Tuesday and participated in the team’s optional morning skate but did not play in the game.

The postgame chaos took the spotlight away from a dramatic comeback by the Ducks, who rallied from a 4-1 deficit in the third period to tie it with goals by Troy Terry, Adam Henrique and Ryan Getzlaf over a five-minute span setting the stage for Whitecloud’s late heroics.

Vegas had allowed just five third period goals in its previous nine games, which made Anaheim’s comeback even more impressive. But the Ducks, who have yet to defeat the Golden Knights in three games this season, weren’t looking for any morale victories.

“The comeback, I think, it shows the resiliency of our team and we can play with any team in this league,” Terry said. “But no one is happy right now. It’s a mindset thing. It’s been this way since I’ve been here. We can’t be happy with coming back and making it close.”