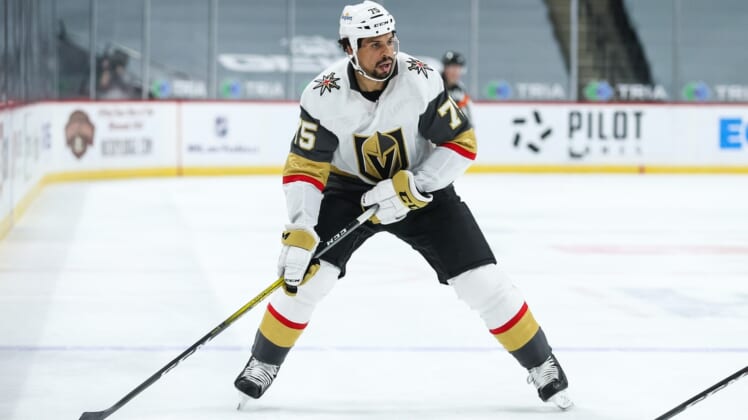 The West Division-leading Vegas Golden Knights will put a four-game winning streak on the line when they begin a back-to-back on Friday night in Los Angeles against the Kings.

It will be an important series for both teams’ playoff hopes. Vegas, despite being on a 10-2-0 run, entered Thursday’s action with just a four-point lead over the Minnesota Wild.

Meanwhile, Los Angeles improved to 9-4-4 over its last 17 games with an impressive 4-1 win over visiting St. Louis on Wednesday and trails the Blues by just three points for the fourth and final playoff spot with a game in hand.

Vegas comes in off a wild 5-4 victory over San Jose on Wednesday in Las Vegas. The Golden Knights trailed 3-1 entering the third period before scoring four consecutive goals over a span of 8:03 and withstood a late Evander Kane goal to improve to 5-0-0 against the Sharks this season.

Enforcer Ryan Reaves ended a 29-game goalless drought dating back to March 3, 2020, against New Jersey — the final home game at T-Mobile Arena before the pause for the COVID-19 pandemic — with a deflection of a Tomas Nosek one-timer for the go-ahead score and Alec Martinez followed 2:19 later with what proved to be the game-winner with a power-play goal.

“It’s been a long time since last season,” said Reaves, who had an earlier goal in the contest taken off the board for goalie interference. “I’ve struggled a little bit this year. I haven’t been playing my best hockey. I’ve been trying to dig my way out of the hole and help the team. A lot of the guys on this team, players and coaches, have helped me dig myself out today.”

The fact that the goal was a key one against San Jose, which handed the Golden Knights a bitter seven-game Western Conference first-round playoff loss in 2019, made the score even sweeter for Reaves, who has just three points in 27 games this season.

“Any time you do anything against the Sharks, it’s fun,” Reaves said. “It’s no secret I hate every one of them over there. So anytime I can do anything like that, it’s a good time.”

“I don’t know if it’s April Fools or St. Patrick’s Day when you see Reaves scoring and (Logan) Couture, (Tomas) Hertl and Stone fighting,” said Vegas coach Peter DeBoer. “It definitely wasn’t a typical game, but it was really hard-fought.”

Los Angeles jumped out to a 3-0 lead in the first 14:11 in its Wednesday win over visiting St. Louis behind goals by Drew Doughty, Carl Grundstrom and Trevor Moore and then cruised to a 4-1 win as Cal Petersen had 19 saves and snapped a personal five-game losing streak. Petersen also picked up an assist on Anze Kopitar’s empty-net goal that sealed the win.

“I think it’s good for us to play with a lead sometimes,” said Kings coach Todd McLellan. “Let’s face it, over the last year and a half, it hasn’t happened enough.”