PREVIEW: Vegas Golden Knights look to bounce back, even series vs. Colorado Avalanche 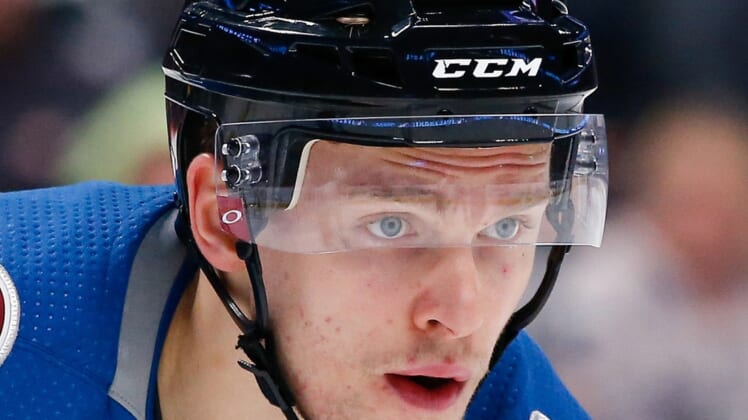 After a strange day that stretched into a late night, the Vegas Golden Knights and Colorado Avalanche resume their four-game set in Denver on Monday night.

The two teams met in the Lake Tahoe outdoor game on Saturday, but the event will likely be remembered for the sun and not the final result. The game started a little after noon but after a sunshine-filled first period that made the ice slushy in areas, the second and third periods were delayed for more than eight hours.

When it ended close to 11 p.m. in Stateline, Nev., the Avalanche had a 3-2 win and headed home with a chance to take three of the four games against the Knights.

The finale will be played inside in Denver, so weather and sunshine won’t be a problem. Weariness might be a factor, however, after a long day and a relatively quick turnaround.

“It was probably (the) weirdest day of hockey I’ve ever been part of,” said Colorado’s Mikko Rantanen, who had two assists in the win. “It started with the early morning and a noon game, and then all of a sudden after the first, they come in and tell us we’re going to play at 9 p.m. It was kind of weird, but we got through it and we got the two points, so it was fun after all.”

The two valuable points came at the expense of a team it trails in the West Division. After a 12-day pause for health and protocol issues, the Avalanche have won the last two games and seem to have shaken off the rust from the time off.

Vegas has stumbled after winning five of six games following a three-game pause. The Knights have struggled on offense over the last five games, scoring just eight goals in that span. Saturday night they had a 5-on-3 advantage for 1:22 when trailing 2-1 and managed just one shot on goal.

“That is an opportunity for us to jump back in the game, and we have to seize those opportunities,” Vegas coach Peter DeBoer said. “Disappointed with our looks and our execution.”

The positive is goaltender Marc-Andre Fleury has looked sharp over the last five games, stopping 139 of 147 shots he has faced. He made 36 saves Saturday night and was screened on the goal that turned out to be the game-winner for Colorado.

“I thought he gave us a chance to hang around,” DeBoer said.

The Knights need to find a way to slow down Nathan MacKinnon. In the last two games he has two goals and two assists. The upside to Colorado’s 12-day pause was MacKinnon missed just one game with a lower-body injury suffered Jan. 31.

As much as the teams enjoyed playing next to Lake Tahoe, they’re ready to get on with the rest of the schedule.

“I’ll remember this experience,” said Alec Martinez, who scored Vegas’ first goal. “Any time you have an opportunity to play in an outdoor game, it’s pretty special. … As for the game, it’s pretty disappointing.”