The Presidents’ Trophy-winning Colorado Avalanche will try to stave off elimination from the Stanley Cup playoffs on Thursday night when they visit the Vegas Golden Knights in Game 6 of their second-round playoff series.

The Golden Knights, blown out 7-1 in the series opener, have overcome a 2-0 deficit in the best-of-seven West Division series by winning three in a row, including a 3-2 overtime victory on Tuesday night in Denver.

Mark Stone scored the winning goal on a breakaway 50 seconds into overtime to move Vegas one win away from a semifinal date with North Division winner Montreal. Marc-Andre Fleury made 28 saves, including a grade-A stop on a J.T. Compher rebound attempt just 10 seconds into the extra period.

“It wasn’t always perfect,” said Vegas coach Peter DeBoer. “This is a tough place to win. And our guys really dug in and found a way.” 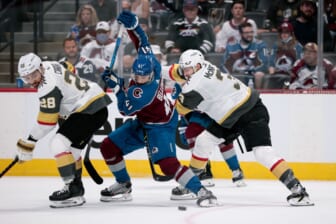 It was a bitter loss for Colorado, which had gone 20-0-1 in its previous 21 games on home ice — including playoffs — and led the game 2-0 heading into the third period before surrendering three consecutive goals.

Teams that win Game 5 in a series tied 2-2 are 215-58 (.788) winning a best-of-seven Stanley Cup playoff series, so the odds will be stacked against the Avalanche heading back to Sin City.

However, Colorado can look back just one month when it defeated the Golden Knights, 2-1, on May 10 in Las Vegas in a game that ultimately decided the Presidents’ Trophy race.

“We don’t have much time to do anything but rebound and forget about this one and move on,” said Avalanche captain Gabriel Landeskog. “We’ve got to go into Vegas and win a hockey game. It’s as simple as that.”

“We’ve just got to turn the page at this point,” added forward Logan O’Connor. “Good teams find a way, and we’ve got to go into a hostile environment there and just worry about the first one. We can’t think about getting two (wins) now. We have to go in there and worry about the first period and try and get one back in their barn.”

The Golden Knights dominated action in the first two games played in Las Vegas. They rallied for two late goals to win 3-2 in Game 3, during which Vegas outshot the Avalanche, 43-20. Vegas followed that up with a 5-1 victory in Game 4 while outshooting Colorado, 35-18.

But Avalanche coach Jared Bednar shook up his lines for Game 5 and the Avalanche responded with their best effort since Game 1, outshooting Vegas 30-25 in the process.

“I don’t see any reason why our team can’t play with the same attack mentality that we had last night and go in there and get the job done,” Bednar said Wednesday.

DeBoer, whose team needed seven games to close out Minnesota in the first round despite taking a 3-1 lead in the series, is hoping the energy generated from a sellout crowd of almost 18,000 will help push his team across the finish line in Game 6.

“We have some guys who have had long playoff runs and we’re only in the second round,” DeBoer said. “That extra boost from our fans is going to be real critical tomorrow.”

Game 7 is Saturday night in Denver, if necessary.