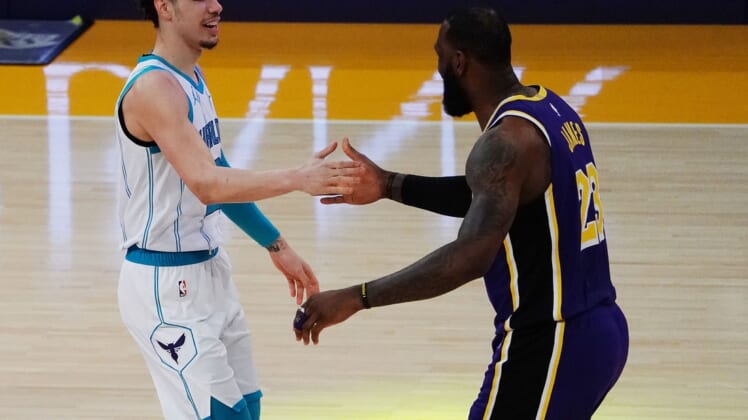 The Charlotte Hornets aim to halt a 10-game road losing streak to the Los Angeles Clippers when the teams square off on Saturday night.

Charlotte hasn’t beaten the Clippers in Los Angeles since posting a 100-95 victory on Feb. 28, 2009. That victory occurred so long ago that the franchise went by Bobcats and current rookie standout LaMelo Ball was 7 years old.

The now 19-year-old Ball will be playing his second game in three nights at the Staples Center, the building located about 30 miles west of his family home in Chino Hills.

The first game went well individually as Ball had 26 points and seven assists in Thursday’s 116-105 loss to the Los Angeles Lakers.

“Definitely felt good playing out here,” Ball said after the contest. “It felt good, but not too good because we didn’t get the win. … The whole team knows we can compete. We all know what we can do. It’s just about putting it together and playing hard.”

Ball has been an immediate standout and is averaging 16.0 points, 6.2 assists and 5.9 rebounds in 40 games (20 starts). He currently rates as a slight favorite for Rookie of the Year honors over No. 1 overall pick Anthony Edwards of the Minnesota Timberwolves.

Ball has scored 20 or more points in seven of the past 11 games. He rates third on the club in scoring behind guard Terry Rozier and small forward Gordon Hayward, who each average 20.4 points.

Despite Ball’s strong play, Charlotte is 0-2 on a five-game road excursion that follows a four-game winning streak.

The Hornets dug themselves a 15-point halftime deficit against the Lakers and were unable to complete a comeback.

“For us, we just have to come out with the same energy,” Charlotte forward P.J. Washington said afterward. “Even if guys aren’t feeling good, we have to be aggressive and play together on both ends of the floor.

“For us to win, we have to bring it from the jump. We have to figure it out and clean it up for the next game.”

The Clippers are also in figure-it-out mode after losing eight of their past 13 games.

The latest disappointing effort came in Wednesday’s 105-89 road loss to the Dallas Mavericks. The point total was Los Angeles’ second-lowest output of the season as it was 9-of-32 from 3-point range and 6-of-11 from the free-throw line.

The Clippers scored just 38 points in the second half.

“I thought offensively we didn’t trust,” Clippers coach Tyronn Lue said. “We didn’t continue to share the basketball. We forced a lot of stuff all night.”

Star forward Kawhi Leonard scored 20 points but made just 1-of-4 attempts from the line.

“Once we get there, gotta knock it down,” Leonard said. “We were 6-for-11 tonight, and I’ll take the lead on that one, being my fault. We just got to keep going, keep pushing, don’t worry about it, just play stronger and make those layups and floaters that we’re trying to get to.

“Just make every shot you shoot. That’s all we can do.”

Leonard has scored 20 or more points in seven straight games and 21 of the past 22.

Fellow All-Star Paul George broke out a slump by scoring 28 points versus Dallas. George scored fewer than 20 points in six of the previous seven games.

George was 5-of-8 from 3-point range after being just 15-of-54 during the seven-game stretch.

Big man Serge Ibaka (back) could return after missing the past two games.