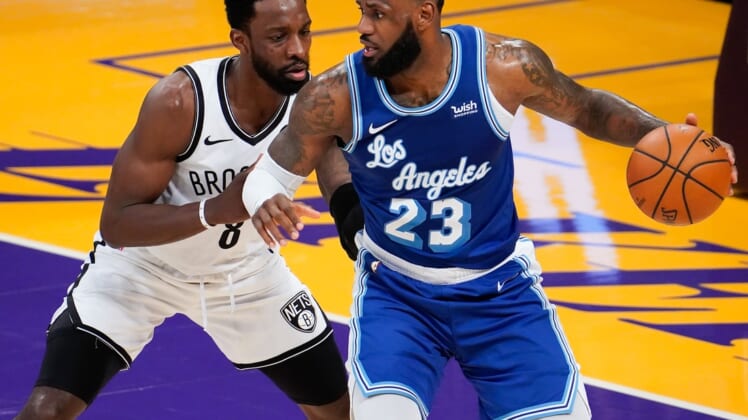 The Los Angeles Lakers expected to encounter some turbulence in their bid to repeat as NBA champions, LeBron James said.

The Lakers will try to successfully manage another test Saturday when they host the Miami Heat in a rematch of last season’s NBA Finals. It will be the first meeting between the two since the Lakers defeated the Heat 4-2 for their league-tying 17th crown in the bubble in October near Orlando, Fla.

It hasn’t all been bubbly recently for the Lakers. On Thursday, they were soundly beaten by the Brooklyn Nets 109-98. James had 32 points, eight rebounds and seven assists for the Lakers, who played without Dennis Schroder due to the NBA’s health and safety protocols.

They also were hurt by the absence of Anthony Davis, who missed his second contest after suffering a calf strain Sunday against the Denver Nuggets. Davis, who was averaging 22.5 points and 8.4 rebounds per game, isn’t expected to return for at least a month.

James, though, reached a personal milestone during the loss, becoming just the third NBA player to top 35,000 points. With 35,017 points overall, James joined Kareem Abdul-Jabbar (38,387) and Karl Malone (36,928) as the only players to achieve the feat.

“For me to be linked with some of the greats that’s ever played the game, it’s always an honor,” James said.

The Heat snapped a three-game losing streak with 118-110 victory over the Sacramento Kings on Thursday. Tyler Herro had 27 points on 12-of-17 shooting as six Miami players scored in double figures.

Jimmy Butler had 13 points, 13 assists and 10 rebounds for his third straight triple-double, the first Heat player to reach the accomplishment. Bam Adebayo also recorded a triple-double with 16 points, 12 rebounds and 10 assists.

According to NBA.com, the two players are the first in league history to earn triple-doubles on multiple occasions. Butler and Adebayo also had triple-doubles against the Atlanta Hawks on Dec. 10, 2019.

However, the achievement was secondary.

“I feel like the win matters more than the numbers did,” Adebayo said. “I’m glad we did the triple-double thing again, but I’m really appreciative of the ‘W.'”

Butler said last season’s setback to the Lakers is history.

“I don’t think nobody’s worried about last year and what happened,” Butler said. “Yeah, we wanted to win and, yeah, they got a championship out of it. This is a new year. Both teams got a different team. We’re going to be locked in on just that day and who can get that win.”