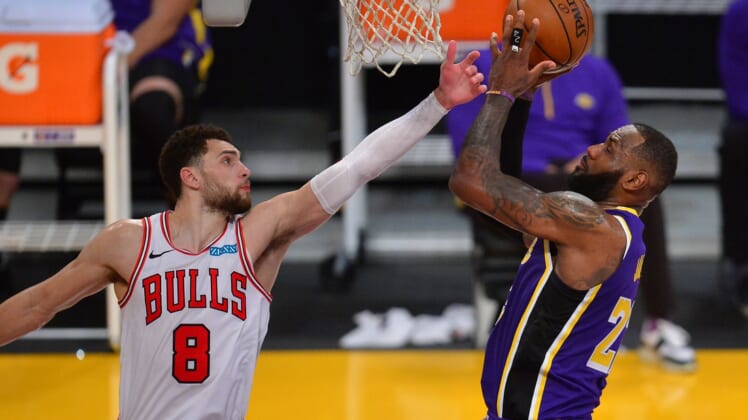 The Los Angeles Lakers will look to improve on their 8-0 road record when they oppose the Chicago Bulls on Saturday night.

The defending-champion Lakers have won six of their past seven games and sit tied atop the Western Conference standings at 12-4 along with the Los Angeles Clippers. They earned a 113-106 road win over the Milwaukee Bucks on Thursday before making the quick trip south to Chicago.

LeBron James scored 34 points on 13-of-25 shooting in the victory, and Kentavious Caldwell-Pope added 23 points on 7-of-10 shooting, all from 3-point range.

Before preparing for the Bulls, James deflected questions about winning the one-on-one matchup against the Bucks’ Giannis Antetokounmpo.

“I think all of you guys know me, it’s never been about individual (accolades),” James said. “It’s all about the team success, and that’s all that matters. I can care less about that. I just try to play well and help our team win versus any opponent, and that’s what it’s all about.”

Now comes the Lakers’ next test.

Chicago (7-8) climbed within one game of .500 after holding on for a 123-110 road win over the Charlotte Hornets on Friday night. Zach LaVine scored a team-high 25 points on 8-of-12 shooting for the Bulls while Lauri Markkanen added 23 points on 10-of-17 shooting.

“(It’s) a little bit of me just understanding, over the last three years, that you can’t do it by yourself,” LaVine said. “I think I took a step in the right direction in the offseason by looking at how I can help my teammates better and trusting (them). Having guys healthy helps a lot.

“I’m just trying to read the game. We’re creating a lot of open shots, so it’s been good.”

The Saturday contest will be the second meeting between the teams this season. The Bulls visited Los Angeles on Jan. 8, when the Lakers held on for a 117-115 victory behind 28 points from James.

Dennis Schroder and Montrezl Harrell added 17 points apiece that day for the Lakers, who won their lone matchup against the Bulls in the 2019-20 season.

LaVine led the Bulls with a game-high 38 points on 14-for-22 shooting, including 4-for-7 from beyond the arc.

Despite the Lakers’ perfect road mark, coach Frank Vogel was not satisfied after the win over the Bucks.

“We have to play better,” he said. “We didn’t play our best basketball (against Milwaukee).”

Anthony Davis could help the Lakers achieve their goal. He registered 18 points and nine rebounds in the Lakers’ most recent contest, and he will look to make a bigger impact in his hometown of Chicago.

The 27-year-old played at Perspectives Charter School on the city’s south side before heading to Kentucky to play for John Calipari.

Davis has described Chicago as the “Mecca of basketball.”

“I mean, it is,” Davis said. “We’ve got the best basketball players ever. You look at the history with all the guys we’ve got that made the league and even the guys that didn’t make the league. They say New York, but it’s not even close.”