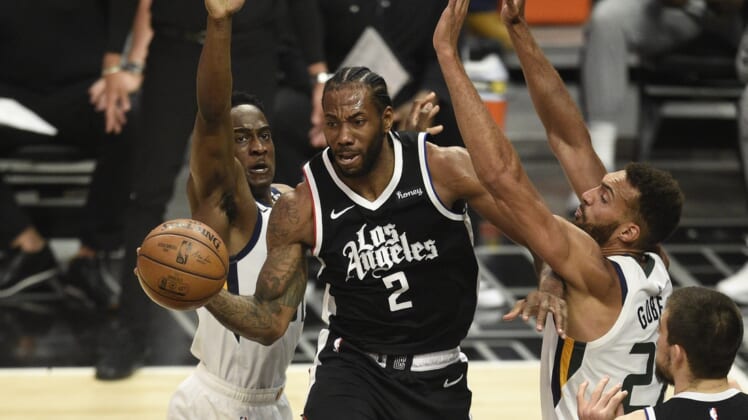 The Los Angeles Clippers got back into the Western Conference semifinals by winning Game 3 and Monday night will host the Utah Jazz looking to even the series at two games apiece.

Kawhi Leonard and Paul George each scored 30 points in the same game for the first time this postseason, and the Clippers pulled away over the final seven minutes after Utah star Donovan Mitchell tweaked his ailing right ankle.

Mitchell made it clear that he will answer the bell for Game 4.

George’s performance was especially welcome after he made just 12 of 35 shots from the field in the opening two losses on Utah’s home floor. He was a brutal 4 of 17 in Game 1. After scoring at least 30 points in 13 of his first 46 regular-season games, George’s performance Saturday marked his first 30-point night since April 23.

George had been anemic from long range through Los Angeles’ first nine playoff games, connecting on just 31.7 percent (20 of 63). But on Saturday, he drained 6 of 10 attempts from beyond the arc and had sustained success against rugged Jazz defender Joe Ingles for the first time in the series.

“Oh, we’re a different team,” Clippers coach Tyronn Lue said in regard to George clicking on offense. “We know that. It’s been like that all season long. He’s been great. You know, he had one bad game, whatever, but people are going to have bad games.”

It wasn’t only George knocking shots down from behind the arc. Reggie Jackson drained 5 of 6 and Nicolas Batum connected on 4 of 6 as Los Angeles made 19 of 36 overall.

“If shots go in or not, our job is to keep being aggressive for ourselves and others,” Leonard said after notching his fourth 30-point outing of the postseason. “If Paul has it going, we’re going to go to him. If I got it going, it’s going to come to me. But if anybody else on the team has it going, we are going to try to get them the next shot as well.”

It has been Mitchell who has it going better than anyone else in the series as he is averaging 37.3 points for the Jazz. He scored 30 in 32 minutes in Game 3 before sitting out the final seven-plus minutes initially due the ankle and followed by coach Quin Snyder’s decision to hold him out as Utah’s deficit ballooned to 21 when the Clippers scored 10 consecutive points.

“He’s in good shape,” Snyder said. “He could have gone back in the game, but at that point, the lead had stretched. In fact, while we were talking, I think Kawhi hit a 3. That was my decision not to put him back in at that point. The game had gotten away from us at that point, but he’s fine.”

Utah point guard Mike Conley (hamstring) has missed the first three games of the series. His availability for Game 4 will be determined Monday.