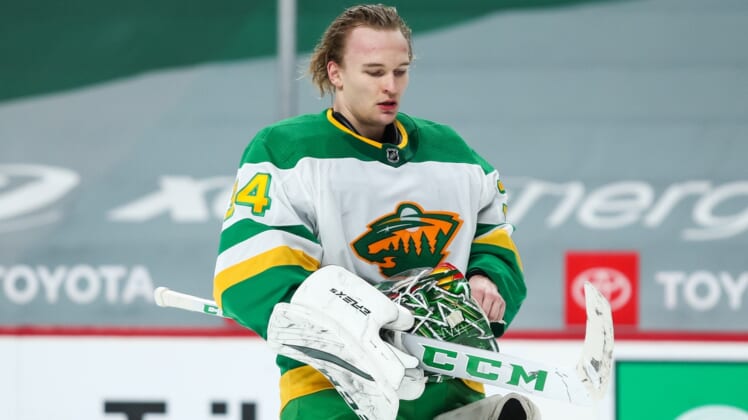 The West Division-leading Vegas Golden Knights will try to earn a split of their back-to-back with the third-place Minnesota Wild when the teams conclude their series Wednesday night in Saint Paul, Minn.

Minnesota improved to 4-0-1 all-time in games against Vegas at Xcel Energy Center with a 2-0 blanking of the Golden Knights on Monday as rookie goaltender Kaapo Kahkonen notched his first career shutout with 26 saves while winning his seventh consecutive start, a franchise record.

Vegas had scored at least four goals in four straight games and had at least one goal in 13 consecutive periods before the loss. It marked the second straight time the Golden Knights, who were shut out by Alex Stalock 4-0 in the only meeting in 2020 in Saint Paul, were blanked by the Wild in Minnesota.

“I thought we had opportunities,” Vegas forward Max Pacioretty said. “They played a strong game. I thought we played really well. It’s not always going to be a high-scoring game, especially in our division.”

“They’re a big, strong team,” added Vegas coach Peter DeBoer. “You’ve got to work to get to the front of the net to score against them, and they take some pride in defending like we do. And we just didn’t get into that area enough.”

The only time Vegas has left Saint Paul with points in its history was on Oct. 6, 2018, when Erik Haula scored in the third round of a shootout to give the Golden Knights a 2-1 victory. Minnesota has outscored Vegas 16-6, with two shutouts, in their five meetings at Xcel Energy Center. And if that isn’t enough bad memories for Vegas, the Golden Knights also were in town on March 12 last season when the NHL shut down the regular season for COVID-19.

The Golden Knights were without top scorer and NHL First Star of the Week Mark Stone (undisclosed) and top defenseman Alex Pietrangelo (left-arm injury) for Monday’s game after both left the team’s 4-0 victory at San Jose on Saturday night with injuries. Pietrangelo left late in the game and appeared to have trouble holding his stick after taking an Evander Kane shot near the wrist area.

“They’re still both being evaluated, so I don’t have an update on that yet,” DeBoer said when asked if the duo could return Wednesday. Neither skated during the Golden Knights’ practice on Tuesday.

“You can’t hide the fact that we got some key guys out, but I think there’s a lot of teams dealing with that,” DeBoer said. “We have a good enough group to get the job done. It was a hard-fought game. We’ve got to find a way to get a goal.”

That might be easier said than done, especially if Kahkonen, who has allowed just 10 goals over his past seven starts, is back in goal.

“I’ve been feeling great,” Kahkonen said. “It’s been a really fun time. But I’m just happy with the way things are going right now. Obviously, getting another win, it’s great. It was a great team win, and I don’t know, I probably sound really boring on these interviews, but it’s just the daily work I believe that matters and doing those little things right, and that will get you here.”

DeBoer said defenseman Brayden McNabb, out since Jan. 26 with a lower-body injury suffered in a 5-4 shootout loss to St. Louis, practiced Tuesday and will be a game-time decision for Wednesday.