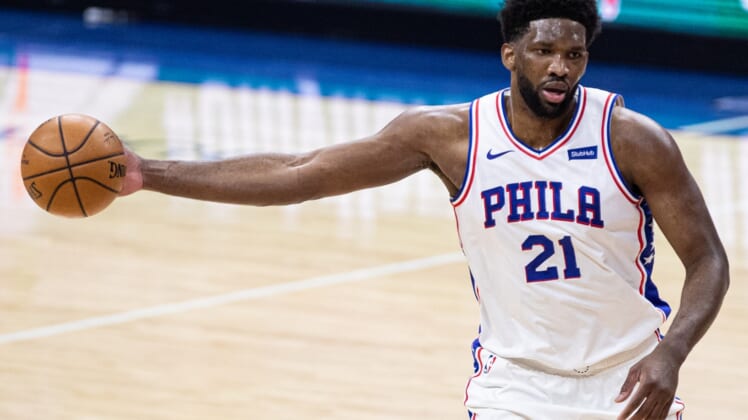 Even with a balky back, Joel Embiid continues to perform at an extremely high level.

Beginning with Friday’s home game against the Chicago Bulls, the question is this: will the Philadelphia 76ers’ All-Star be able to keep playing every night?

Despite wincing in pain throughout Wednesday’s 118-113 win over the Houston Rockets, Embiid managed 31 points, 11 rebounds and nine assists in 37 minutes.

It was Embiid’s seventh game this season with at least 30 points and 10 rebounds. Embiid could be seen stretching his back during timeouts against the Rockets.

Can he keep pushing through the discomfort?

“It’s not alarming,” Embiid said. “As NBA players, we play every single night, and the body is just sore and you’ve just got to take care of yourself. It’s normal. It’s just tightness. As the days go, some days it’s tighter than usual; some days it’s not.”

Embiid aggravated his back during a hard fall against the Los Angeles Lakers on Jan. 27 and he missed Monday’s road loss against the Utah Jazz.

Seth Curry (25 points) and Tobias Harris (24 points, 15 rebounds) picked up the slack without Simmons and Milton.

The Bulls will be searching for their third straight win when they visit the Sixers.

In their most recent game, they rallied from a 25-point deficit and eked past the Detroit Pistons 105-102 on Wednesday.

Zach LaVine led the way with 37 points to help catapult the Bulls to the largest comeback victory in the league this season.

Bulls head coach Billy Donovan was clearly upset with his starting unit as he made a number of lineup changes in the second half. The strategy worked.

“As professionals you hope they go to the locker room; they regroup; they realize there’s going to be some changes made,” Donovan said. “When my number’s called, I have to be ready and prepared, and I thought those guys did that.”

Thad Young, a former Sixer, gave the Bulls a big spark off the bench with nine points and 10 rebounds. The Bulls, who have dropped five in a row at Philadelphia, will likely be without Otto Porter Jr. for a ninth consecutive game with back spasms.

LaVine was terrific in the third quarter as the Bulls mounted a huge comeback. Their defense overall was better as they limited the Pistons to only 12 points in that quarter.

“It’s a flip of the switch,” LaVine said. “Sometimes you gotta go out there and make a play.”

Coby White struggled in the first half, but responded well in the fourth. White finished with eight points and six rebounds.

“I need to grow up a little bit,” said White. “It was a learning experience for me. I’ve got to accept the challenge.”