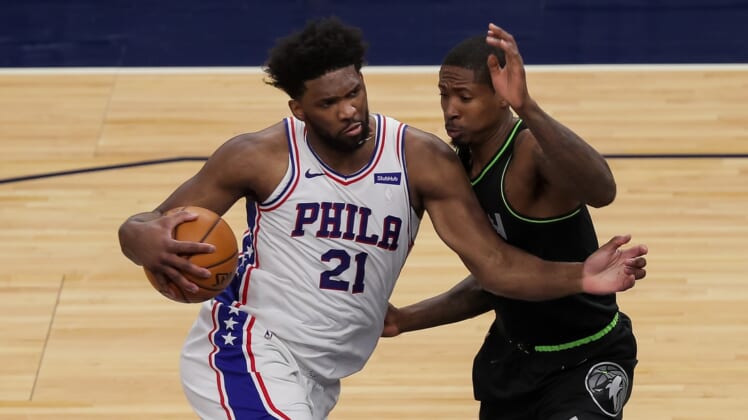 Joel Embiid didn’t let back tightness slow him down during another impressive performance in a 118-94 win over host Minnesota on Friday night in Minneapolis, Minn.

Two days after a scary fall against the Lakers, Embiid finished with 37 points, 11 rebounds and three assists in only 27 minutes to lead the Philadelphia 76ers to a 118-94 win.

The Sixers have won five of their past six games and will continue their three-game road trip Sunday night against the Indiana Pacers at Indianapolis.

“The last treatment that I had (late Thursday) night was at like 1 a.m. so even if it means not sleeping, just make sure that the body is right,” said Embiid, who is averaging a career-high 28.3 points as well as 11.1 rebounds per game. He’s shooting 54.4 percent from the field, including 40.4 percent from 3-point range.

“Obviously, sleeping helps a lot, too, but treatment is the first thing. So, little stuff like that matters. You gotta keep on going. It’s hard, but that’s what we get paid for, and you gotta do your job.”

Assuming Embiid can go against Indiana, his next challenge will come against Domantas Sabonis (20.5 points, team-leading 12.2 rebounds per game).

Despite Sabonis’ efforts, the Pacers have suffered five frustrating defeats this season by five points or less with the latest coming Friday night against the Charlotte Hornets.

Part of the problem has been on defense, which showed again as the Hornets finished with six players scoring in double figures in the 108-105 win.

“We didn’t get as many stops as we would’ve liked to, all game long,” Myles Turner said. “Rebounding hurt us, too. It seemed like every time we missed a rebound they hit a 3. …This is one of these games you kick yourself for.”

Indiana’s struggles on that end have come despite Turner’s improved play on that end. He has an NBA-best 4.1 blocks per game.

The Pacers also shot just 7-for-26 down the stretch from 3-point range and Doug McDermott was limited to only 11 points in 17 minutes after scoring 28 points two nights earlier in the first of Indiana’s back-to-back games against Charlotte. It was the Pacers’ third back-to-back set and they have split all three.

“They don’t make any excuses about anything — about not being able to leave the hotel or being around people,” Pacers coach Nate Bjorkgren said. “They’re following the rules. They’re doing a good job of that. We were together here for a few days out on the road, it’s a lot of time to bond together as a team. We fought tonight. We just got beat.”

The Sixers continue to be one of the league’s best defensive teams with a 106.7 defensive rating per NBA Advanced Stats.

Tobias Harris (8.6 plus-minus) and Ben Simmons (1.6 steals per game) have kept the defense effective while often playing as the lone starter on an otherwise all-reserve lineup on the court. Harris is also off to a career-best shooting start (51.4 percent overall and 46.8 percent from 3-point range).

Matisse Thybulle (1.4 steals per game) has provided help defensively as well since the club lost forward Mike Scott to a knee injury on Jan. 14.

“He’s just a hell of a defender,” Sixers coach Doc Rivers said. “He’s got his legs under him now. He knows what we expect of him, and he’s been terrific.”