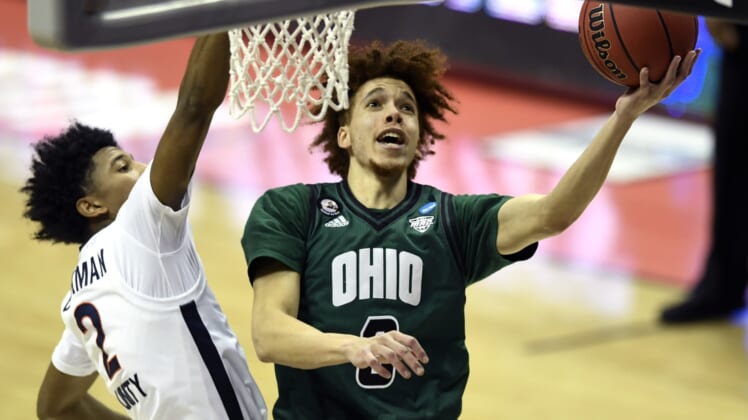 After knocking off the defending champs in the opener, No. 13 seed Ohio looks to make another unlikely Sweet 16 run when it faces No. 5 Creighton in a West Region second-round game Monday in Bloomington, Ind.

In its most recent NCAA appearance in 2012, Ohio was also a 13th-seeded Cinderella when it beat Michigan and South Florida before losing in overtime to top-seeded North Carolina in the Midwest regional semifinal.

Virginia led 38-31 before the Bobcats surged ahead with a 16-2 run to take their first lead since it was 3-0. Ben Vander Plas scored the last eight points of the spurt and finished with 17. Jason Preston added 11 points, 13 rebounds and eight assists, and Ben Roderick scored 15 points.

“We followed the game plan and really executed, especially on the defensive end,” Preston said in his on-court interview after the game.

In the only previous meeting between the schools, Creighton defeated Ohio 57-55 in 1962.

On Saturday, Christian Bishop made both ends of a one-and-one with 16 seconds left to lift the Bluejays over the Gauchos. The junior forward entered the game shooting just 55.2 percent from the line for his career.

“Yesterday when I was shooting free throws, I was like, ‘Why am I missing?’ And one of the coaches said to just tell yourself you’re going to make it, it’s a mental thing,” Bishop said. “So I just gave myself the confidence and I hit the shots.”

After Amadou Sow gave the lead back to UCSB with a layup and two free throws, Creighton used a timeout to set up a shot for Damien Jefferson. His try rimmed out but Bishop snagged the rebound and was fouled.

It was the 400th win for coach Greg McDermott, who also coached at Iowa State and Northern Iowa. He returned to the bench after missing the Bluejays’ Big East tournament loss to Georgetown on March 13 while serving a one-game school suspension for racially insensitive remarks made to his team.

“I appreciate the fact that our guys had it in their hearts to forgive me and allow us to move on together,” he said after Saturday’s win. “But there’s still a lot of work to do, and I recognize that.”