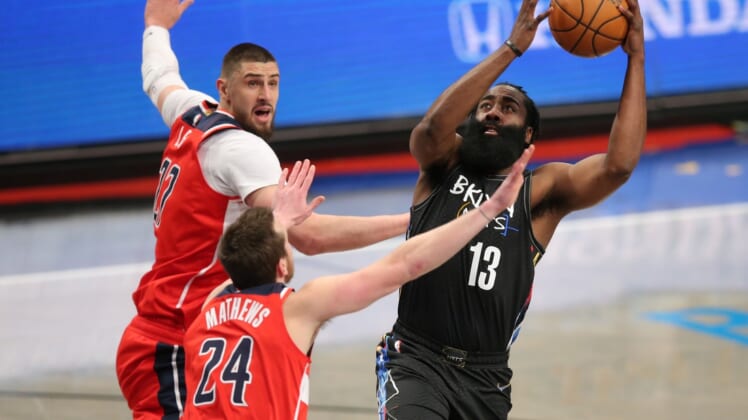 The Brooklyn Nets look to continue their run up the Eastern Conference standings when they open a three-game road trip against the Portland Trail Blazers on Tuesday night.

Brooklyn will be seeking its 16th victory in 18 games but will be without the services of guard Kyrie Irving.

The team announced Monday that Irving will miss the contest to “tend to a family matter.”

That will leave James Harden as the lone player of the team’s “Big Three” on the floor with forward Kevin Durant still sidelined with a hamstring injury.

The Nets are just one game behind the first-place Philadelphia 76ers in the East as they embark on the trip that includes games against the Western Conference-leading Utah Jazz as well as the Detroit Pistons.

“I think every game is a test for us. We’re not allowed to take anyone lightly. We don’t have the luxury of that,” Harden told reporters. “Every night we prepare for our opponent to the best of our ability, and the coaches do a really good job of that to prepare us and we go out there and try to execute.

“Our next opponent is Portland, who have been playing pretty well. … We can’t look further down the line.”

Harden has been superb since joining the Nets after being acquired from the Houston Rockets. He recently posted three straight triple-doubles and is averaging 25.4 points, 11.3 assists and 8.8 rebounds in 29 games with the club.

Harden has averaged 38.5 minutes in six games since the All-Star break and there surely won’t be a reduction in minutes with Irving missing the next three games. But Nets coach Steve Nash would like to trim the 31-year-old’s playing time a bit.

“I’m concerned about the minutes,” Nash said. “I’m not sure what the answer is, though. He controls the game. …

“He had another great performance (Sunday) even if it wasn’t necessarily a typical Harden game. So it’s hard to take him off the floor because he makes his teammates better.”

Harden will look for more success against a Portland squad that was drubbed 132-92 at home by the Dallas Mavericks on Sunday night.

The 40-point thumping is the Trail Blazers’ worst of the season and came after the squad won seven of their previous nine games.

“You have nights like this, but I don’t think anybody ever just throws up their hands,” Portland coach Terry Stotts said afterward. “You still compete, you defend, you never know what will happen throughout the game. Sometimes the game turns, sometimes it doesn’t. And it didn’t.”

The Trail Blazers were a shaky 9 of 41 from 3-point range and the trio of Damian Lillard (seven attempts), CJ McCollum (five) and Carmelo Anthony (four) never saw one go through the net.

“We really depend on our offense and making 3s and any time me, CJ and Melo go 0-for-16 from three, we’re not going to have much of a chance,” Lillard said.

The defense was also a problem as Dallas star Luka Doncic was 8-for-9 shooting from long range while scoring 37 points.

Brooklyn guard Landry Shamet (ankle) also didn’t travel with the team after being injured against Washington.