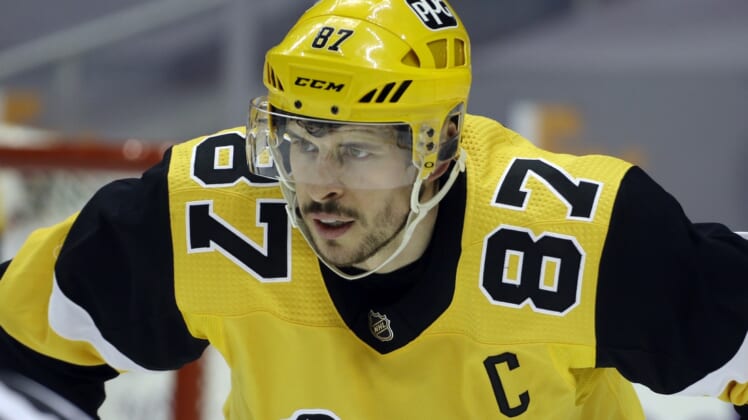 The Pittsburgh Penguins have dealt with injuries all season, but there’s a new and glaring wrinkle. Their center depth, long a strength in the organization, is being tested — and it didn’t go so well Thursday in New Jersey.

The Devils built a three-goal lead and posted a 3-2 win against a Pittsburgh team that was missing No. 2 center Evgeni Malkin and No. 3 center Teddy Blueger.

Malkin, who missed his first full game, and Blueger both were put on injured reserve Thursday because of undisclosed injuries. That means they both will miss games on Saturday and Sunday afternoon as the Penguins and Devils finish three games in a row. Saturday’s game is back in Newark before the “miniseries” moves to Pittsburgh.

It helped the Devils that they kept Pittsburgh’s top center, captain Sidney Crosby, off the scoresheet.

It might help the Penguins that forward Jared McCann, who can play on the wing or at center, could return this weekend from an unspecified injury.

“We like the guys we have in the locker room,” said top-line winger Jake Guentzel, who scored for Pittsburgh on Thursday. “We know we have capable guys (even with key players out). But we’ve just got to have everyone step up here. We’ve got to do it by committee. We can’t take any nights off.”

Similarly, Penguins coach Mike Sullivan believes that his personnel, even when hit by injuries, has a winning blueprint it can follow.

“We’re looking for a collective effort,” Sullivan said. “We’ve got to be hard to play against. We’ve got to rely on our team structure. We’ve got to do our jobs and trust that our teammates are going to do theirs.

“When we do that and manage the game the right way, we’re going to give ourselves a chance to win most nights.”

Pittsburgh has lost two in a row after a six-game winning streak, and its loss Thursday was just its second in nine games against the bottom three teams in the East Division.

The Devils, too, were dealing with absences Thursday. Namely, goaltender Mackenzie Blackwood, who left during the pregame warmup because of an undisclosed injury.

No problem. Scott Wedgewood stepped in at the last minute and made 40 saves.

“You’ve got to give (Wedgewood) a lot of credit to be ready and be called upon when you’re not the starter and you basically have 15 minutes to prepare yourself mentally and give your team a good game,” New Jersey coach Lindy Ruff said.

It’s unclear how the Devils will handle the goaltending chores in the back-to-back games this weekend.

The Devils have gained some confidence in special teams, a weak spot much of the season. They have power-play goals in three straight games and have killed 16 of the last 17 opponent power plays.

“All year on the power play we’ve had good looks; the puck just didn’t bounce our way, especially early in the season,” said defenseman P.K. Subban, who scored Thursday with a man-advantage. “We’re just trying to play with confidence, play loose, and not be so stagnant.”