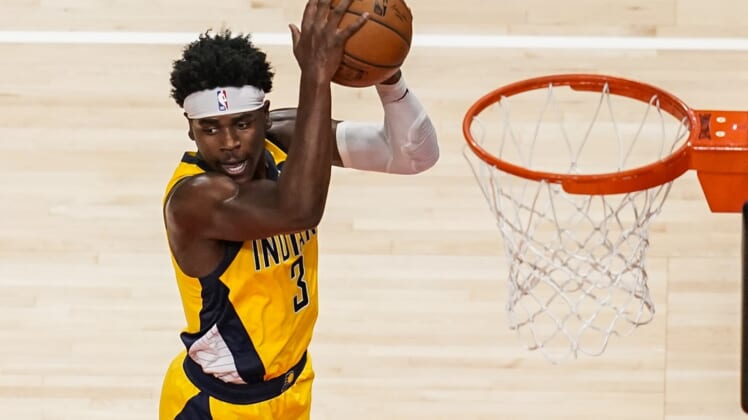 The Indiana Pacers’ best quarter yet this season proved clutch.

Indiana scored 41 points in the fourth quarter on Saturday night to rally to a 125-113 road win over the Atlanta Hawks.

The Pacers will try to pick up their third consecutive victory when they host the Chicago Bulls on Monday night in Indianapolis.

Indiana erased a nine-point deficit with a 27-7 run thanks to Aaron Holiday’s 13 points in the final period. Doug McDermott scored 26 points, Myles Turner had 19 points and 10 rebounds, and Domantas Sabonis had 14 points and 13 rebounds.

“We just stuck with it,” said Holiday, who finished with 18 points. “In the first half, they crept back into the game right before the half ended. We wanted to pick up the pace, move the ball on offense and lock in on defense.”

Indiana’s defense contained Hawks star guard Trae Young just enough — 15 points and 14 assists — and the Pacers outrebounded one of the NBA’s best on the boards 43-38.

“The pick-up points on Young are very important,” Pacers coach Nate Bjorkgren said. “He’s a proven player who can shoot it very deep. He can draw fouls from very deep on the floor with shot fakes and stopping quickly behind screens. It’s important to impact his body.”

Young also was held without a 3-point attempt for only the second time in his career.

“We know where every guy shoots going into the game,” McDermott said. “(Coach) really wants us to flush them off the line.”

Following an outstanding shooting performance against the Pelicans on Wednesday in which the Bulls made 25 3-pointers, Chicago couldn’t find the mark nearly as well Friday against the Los Angeles Clippers. The Bulls connected on 12 of 32 attempts in a 125-106 setback.

Bulls coach Billy Donovan lamented too many quick, unproductive possessions on his team’s part during the final two quarters, which hurt Chicago’s ability to slow down the Clippers.

“They were quick possessions,” Donovan said. “It was like no pass, one pass, shot. And if you don’t make those shots, you’re back having to guard again instead of maybe getting to the free-throw line, slowing the game down, getting physicality into the game defensively.”

Bulls rookie Patrick Williams had the unenviable task of guarding Kawhi Leonard for the second time this season and didn’t fare well. Leonard scored 16 of his 33 points in the third quarter.

“Me, I think I could have done better — energy, defensively, just making it tough on him,” Williams said. “I think he was a little bit too comfortable out there. That’s on me. So, just gotta watch the film and get better from it offensively and defensively.”