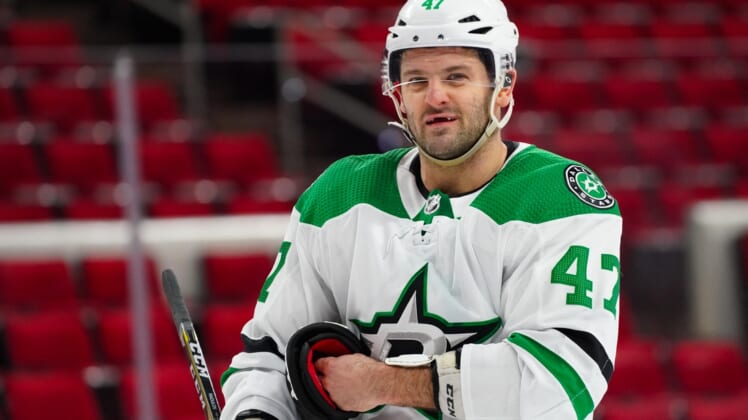 Needing something to boost their mediocre season, the Dallas Stars may have found a spark in a familiar face.

After a 15-game absence, Alexander Radulov returned to the club’s lineup Sunday and scored the game-deciding goal — the only successful attempt in a shootout — as Dallas beat the host Columbus Blue Jackets 2-1.

The victory lifted the Stars to a 3-1-2 mark in their past six games, gave them three points in Ohio in two contests and provided some extra momentum as they return home for a single game Tuesday against the Tampa Bay Lightning.

The game was rescheduled after a Feb. 20 postponement due to frigid conditions and power outages across Texas.

Dallas will then play twice in Detroit before returning home Sunday to face the Nashville Predators.

In the shootout at Columbus, Radulov lifted a slick backhander over Columbus goalie Joonas Korpisalo in the third round to end the one-on-one competition.

After going 3-7-5 without the right winger, Dallas won for the first time in four shootouts this season. The Stars are 2-6 overall in games that go beyond 60 minutes.

Stars coach Rick Bowness said the 34-year-old Russian’s enthusiasm is a welcome addition to the bench as the team tries to climb into one of the Central Division’s four playoff slots.

“You see his value to the team in a lot of ways,” Bowness said. “He was very good on the bench (Sunday), very supportive of the guys, very positive.”

Radulov, who is skating on a line with Roope Hintz and Jason Robertson, highlighted the importance of getting the close win.

“We’ve put ourselves in this spot and we’ll fight to get back,” a visibly tired Radulov said after his first game since Feb. 4. “We just need to find a way to win these tight games that are 1-1, 2-2 … and get that extra point.”

The Lightning will look to keep zeros on the home side of the scoreboard — something they have done well against the Stars this season.

The two Stanley Cup Final participants last season have played twice in 2021 — once in Tampa, once in Dallas — with the Lightning posting shutouts in each contest.

Tampa Bay goalie Andrei Vasilevskiy started both games and frustrated the Stars throughout. The 2019 Vezina Trophy winner backstopped his club to 5-0 and 2-0 victories — the only games in which Dallas was blanked this season.

Vasilevskiy, who has stopped all 48 shots by the Stars, got the day off Monday in the Lightning’s 4-1 matinee loss to the visiting Nashville Predators. He is expected back in the crease Tuesday.

Curtis McElhinney made 22 saves in his place, but Nashville — poor on special teams this season — exploited the Lightning in a three-goal second period.

Nashville started the game 19th on the power play and last on the penalty kill but tallied on the man advantage, killed off all three Lightning power plays and went up 3-0 on Calle Jarnkrok’s short-handed goal.

“When your power play is clipping the way ours is (fourth in the league before Monday), if you go 0-for-3 in a game, all of a sudden alarms are going off — no,” Lightning coach Jon Cooper said. “Tonight, the other team was better. It helped them win a game. More often than not, it helps us win games.”