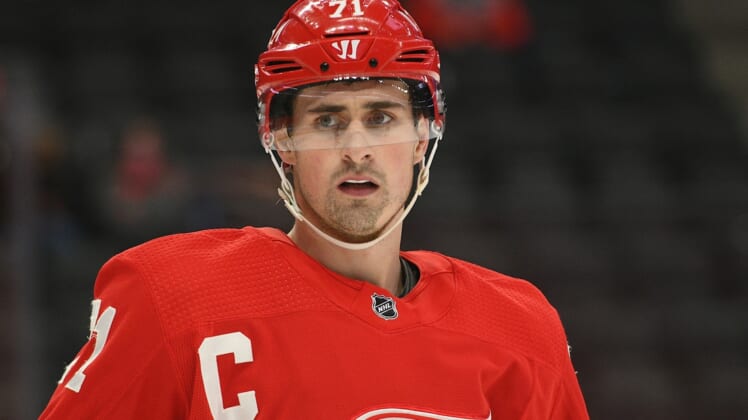 The Detroit Red Wings still reside at the bottom of the Central Division but they’re not playing like a last-place team.

During the first four games of a six-game homestand, the Red Wings have posted a 2-1-1 record against defending Stanley Cup champion Tampa Bay and red-hot Carolina.

Detroit snapped the Hurricanes’ eight-game winning streak with a 4-2 victory on Tuesday. The Wings will wrap up the homestand with two games against Dallas, beginning on Thursday.

“It feels good for the group in there,” forward Robby Fabbri said. “We’ve been playing some good hockey lately, and to get some results against some very good teams shows the improvement and shows everyone coming together. It makes it a lot of fun to show up and have games like this as we start getting fans coming back in the building.”

Fabbri scored what proved to be the game-winning goal in the second period. Adam Erne scored two power-play goals, the first time he’s done that in a single game during his career.

“We feel pretty good about ourselves the way we’ve played,” Erne said. “I think that’s the way we want to play every night, and hopefully we can continue to do that because that’s leading to us beating some of the better teams in the league.”

Detroit has gotten healthier in recent weeks. The return of first-line center Dylan Larkin, who missed four games with an upper-body injury, has been particularly significant. He had two assists in Tuesday’s victory, giving him four points over the last four games.

“A number of games we played good hockey and didn’t have results to show for it,” Detroit coach Jeff Blashill said. “Now, we’re in a spot where we’ve played pretty good hockey and starting to see results. It’s important reinforcement for guys to keep their belief up. We’ve got lots of season left. Let’s continue to grow as a hockey team and continue to grow as individuals.”

The game on Thursday will be the third of eight meetings between Detroit and Dallas. The Stars won the first two matchups at home in late January.

Dallas has gone 3-5-3 over its last 11 games, with its last three outings being decided in overtime or shootouts.

Tampa Bay defeated the Stars 4-3 in a shootout on Tuesday.

Dallas trailed 3-1 with less than three minutes remaining, and coach Rick Bowness felt fortunate to come away with a point.

“Any points you can get when you are chasing a playoff position is important, especially when you are down 3-1 with three minutes to go, and especially after that first period we had, which was probably our worst first period of the year,” Bowness said. “So, it was a great point because we battled back. We responded in the second and we didn’t quit.”

Jamie Benn recorded a goal and an assist during the third-period rally.

“I think it is just belief in that locker room,” Benn said. “We are never out of the game, and it’s a group of guys that don’t quit. I think it kind of started last year, and it builds confidence. You can come back in games.”