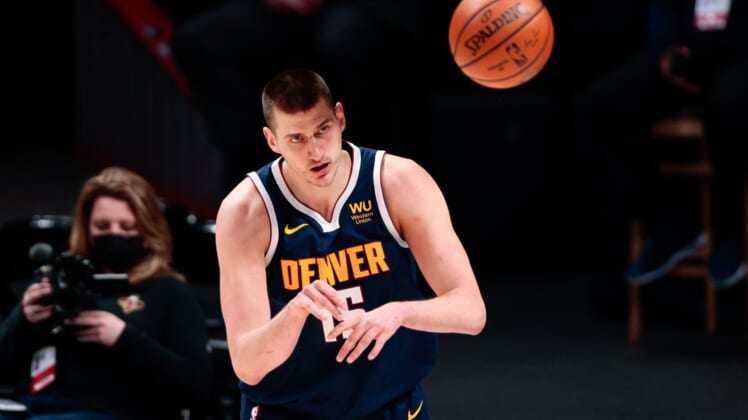 The Denver Nuggets weren’t happy Sunday after losing for just the second time in the past 10 games. So Tuesday, they’ll aim to take their frustrations out on the Magic when they begin a three-game trip in Orlando. And their frustrations weren’t limited to the way they performed.

Nikola Jokic recorded his 11th triple double of the season in Denver’s 113-108 setback to the New Orleans Pelicans on Sunday. While the NBA Most Valuable Player candidate collected 29 points, 10 rebounds and 10 assists, it was another number — zero — that leaped off the page.

“You’re gonna tell me Joker’s gonna play a 48-minute game and not get to the line once?” Nuggets teammate Jamal Murray said, per the Denver Post. “I’m telling you that’s ridiculous.”

Jokic wasn’t in a laughing mood when he noted the disparity in free-throw attempts (30 to 10) between the teams.

The frequency in which the opponent went to the foul line wasn’t lost on Nuggets coach Michael Malone, although he also was quick to point the finger at his own team as well.

Orlando’s Nikola Vucevic recorded his 29th double-double of the season after collecting 22 points and 13 rebounds in Sunday’s setback to the Celtics. Vucevic averages team bests in points (24.6) and rebounds (11.8).

Sunday’s loss marked the fourth time in the past five games that Orlando fell short of 100 points, although it was the team’s defense that gave Vucevic cause for concern.

“We weren’t aggressive enough and being into the ball. We just kind of let them play to their strengths as a team, and it’s just difficult,” Vucevic said. “And so when you don’t get into them and make it hard, it’s going to be a tough night. They shot the ball very, very well, but a lot of it was also because we just didn’t make it hard on them.”

James Ennis III provided a bright spot by scoring 18 points in his return from an eight-game absence due to a calf injury.

The Magic will try to fend off a Denver team that has been increasingly comfortable on the road lately. The Nuggets, who are 13-8 away from home, open a three-game trek on the heels of having swept a five-game trip from Feb. 27 through March 12.