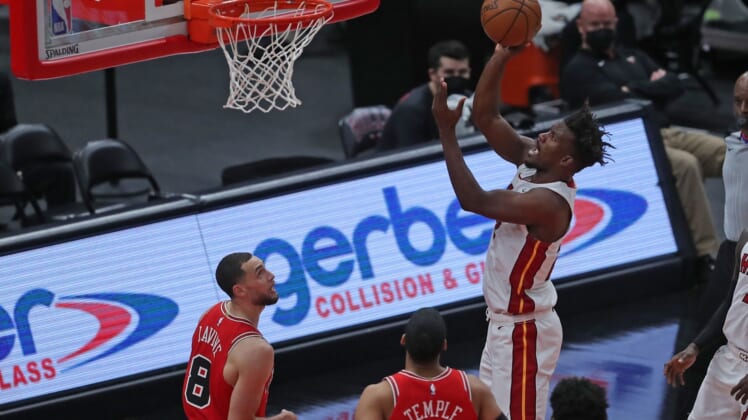 The Miami Heat will host the Cleveland Cavaliers on Tuesday night having won 10 of their past 11 games.

This will be the first meeting of the season between the Cavs and Heat.

Miami has been so good lately that the team has won its past four games without center Bam Adebayo, a 2020 All-Star who is day-to-day due to a knee injury. He leads the team in blocks and rebounds and ranks second in assists and points.

With Adebayo out, Jimmy Butler has even more responsibility.

In Sunday’s 102-97 win over the Orlando Magic, Butler had a team-high 29 points but also nine assists, seven rebounds and five steals.

Heat coach Erik Spoelstra said Butler has a “knack” for steals, such as the one that thwarted Orlando’s chance at a tying 3-pointer in the final seconds.

“He has a super-high IQ and cat quickness that you can’t teach,” Spoelstra said. “It surprises everybody.”

The Cavaliers shouldn’t be surprised by Butler’s excellence. Butler leads Miami in scoring (21.4 ppg), assists (8 per game) and steals (2.2 per game). He also averages 7.4 rebounds, making him a triple-double threat every night.

Without Adebayo, 6-foot-11 Kelly Olynyk has become more prominent for Miami. He is averaging 10.5 points and 6 rebounds a game. But Sunday, he had 10 points in the first quarter alone, shooting 4-of-4 from the floor, including 2-of-2 on 3-pointers. He finished with 18 points.

Spoelstra said he wants to see more consistency from Tyler Herro, who was Miami’s second-leading scorer on Sunday with 22 points.

In his six games since returning from a hip injury, Herro has been held to single digits in scoring three times.

In the other three games, Herro is averaging 17.7 points, which is where he likely should be due to his talent. Herro, 21, was Miami’s first-round pick in 2019; he averages 15.7 points a game this season.

Cleveland, which has lost three straight games, has struggled on the road this season (5-14).

The Cavaliers have some major issues, including Andre Drummond and Kevin Love.

Drummond, a two-time All-Star, no longer plans to play for the team, as the Cavaliers are trying to work out a trade for the player who has led the league in rebounds four times.

Love, a five-time All-Star, has four points in two games – totaling 12 minutes – since coming back from a calf injury that forced him to miss 33 games.

He started but played just two minutes in a 100-82 loss to the Atlanta Hawks on Sunday.

Cleveland’s strength is its young backcourt. Darius Garland, 21, leads the Cavs in assists (5.9 average) and ranks second in scoring (15.9), and Collin Sexton, 22, averages a team-high 23.7 points a game.

“I’m starting to just play and not overthink the game,” Sexton said.