PREVIEW: Golden Knights head to Montreal for Game 3 vs. Canadiens 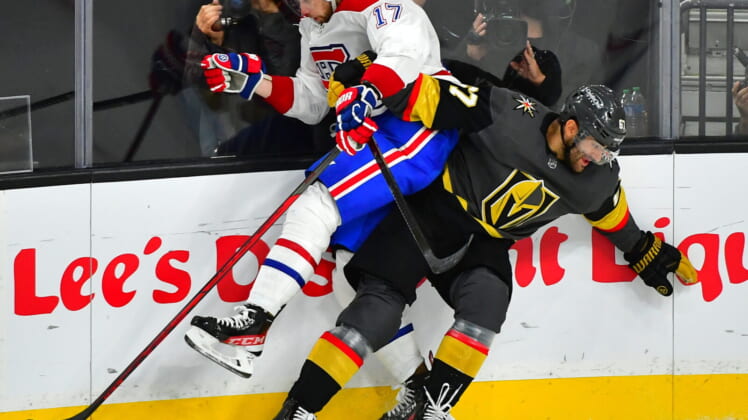 After a disappointing Game 2 loss in which their comeback attempt fell short, the Vegas Golden Knights will now cross the border for the first time this season for a crucial Game 3 with the Montreal Canadiens.

In any series tied 1-1, it’s the third matchup that determines who will be the aggressor for the rest of the series and the likely winner.

The Canadiens managed to steal a game on the road in Las Vegas, and now the Golden Knights will need to match that if they do not want to return home facing elimination. With the Stanley Cup Finals so close they can taste it, execution will be of utmost importance for the Golden Knights.

They will be looking to replicate what happened in Game 1 more than what happened in Game 2. In the former, the Golden Knights controlled the game on their way to a 4-1 victory. They did a great job making things difficult for the Canadiens by clogging up the neutral zone and getting sticks in lanes.

To do that again, they need to score the first goal so that they can be the ones that play a more defensive game. The Canadiens are also very good at playing with a lead and Game 2 was a great example of how tough it can be to comeback on them once down a few goals.

Chandler Stephenson, the Golden Knights’ first-line center, missed Game 2 due to injury. He did not skate this morning, putting his status for tonight’s game into question as it seems likely that he will need more time to rest up and heal. Stephenson is a quick skater that has meshed well alongside the two top wingers on the top line and his absence will be felt.

Head coach Peter DeBoer attempted to fill that gap with Nic Roy in Game 2 as he bumped the center up the lineup. That line was stifled as the Canadiens did a good job of not allowing too many scoring chances, relying on Carey Price to stop anything that got through. Credit must be given to Shea Weber and the rest of the Canadiens’ defensive group who had a great performance.

The morning skate may have revealed that DeBoer plans to switch things up tonight.

While not a center, Alex Tuch does have that speed element to his game that could help replicate Stephenson’s impact. However, taking Tuch off the third line means that there will be much less scoring from the bottom-six.

This will be the Golden Knights first road game that is not against a West Division team. Because of the way that the NHL schedule worked this year, teams were not exposed to those not in the same division. This stage of the playoffs is the first we have seen of teams from different divisions playing against each other, and it will be the first time the Golden Knights have traveled to Canada.

Luckily for the Golden Knights, the Canadiens will not be permitted to have a full arena due to stricter COVID-19 regulations in Canada. Playing in front of such a small crowd will definitely be an adjustment for both teams who have played in front of a rocking T-Mobile Arena for the past two games.

While in previous playoff rounds the Golden Knights have travelled to locations that they’ve already been this year, tonight’s game marks a new development and it’s yet to be seen if that will have any effects.

The Golden Knights forwards have only scored one goal through two games. They’ve been fortunate enough to get an additional five goals from defenders, but one goal across two games is far too little for a forward group that includes players as offensively talented as Mark Stone and Max Pacioretty.

If the forwards can get going, this series could get out of hand very quickly but so far that hasn’t been the case as they have struggled to create much offensively. A large part of that is the players on the Canadiens roster and the system they play as they are very responsible defensively.

Stephenson’s absence will make this even harder but when you’re in the NHL playoffs, it’s a guarantee that there will be injuries and adversity to overcome. Your best players are your best players for a reason and the onus does fall on them to produce, but the Golden Knights also have a very deep roster and goals from all over are expected.