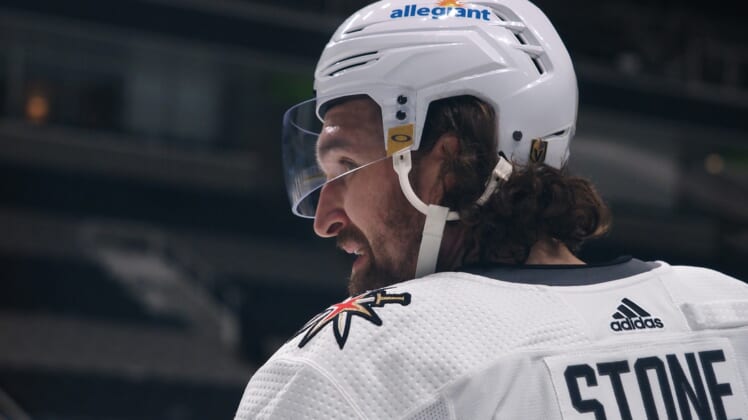 Perhaps it wasn’t something to hang in the Metropolitan Gallery/Art Museum in Las Vegas.

But right wing Mark Stone and goalie Marc-Andre Fleury had enough artistic moments Monday night as the Golden Knights returned home from a six-game trip and defeated the San Jose Sharks 2-1. The teams will meet again Wednesday at T-Mobile Arena.

“It wasn’t a Picasso. We had a soft start,” said Stone, who had a goal and an assist to extend his point streak to eight games, starting March 1. He has a league-leading 16 points (six goals, 10 assists) in March with five multi-point games.

Max Pacioretty also had a goal and an assist and Fleury made 23 saves in his 16th start in 17 games as the Golden Knights won their third in a row.

“I kind of expected the start. It looked like we had been on the road for 10 days,” Vegas coach Peter DeBoer said. “I felt at morning skate our energy was off. I felt it was going to take a little while to work into the game. Thankfully, (Fleury) was our best player in the first and allowed us to get our legs under us.”

It was Fleury’s 481st career victory, three behind Ed Belfour for fourth in NHL history. Among goaltenders who have played at least 20 games this season, Fleury tops the league with a 1.77 goals-against average and .936 save percentage.

With the Knights leading 2-0 midway through the third period Monday, Sharks forward Evander Kane forced a turnover and was on a breakaway, only to have Fleury make a diving poke-check.

“That was sick,” Pacioretty said of Fleury’s play. “That dude is just the man.”

Timo Meier thwarted Fleury’s shutout bid with a goal at 14:29 of the third. Devan Dubnyk made 34 saves for the Sharks, who had their three-game winning streak come to an end.

“I thought there were a lot of good things to take from this game,” San Jose coach Bob Boughner said. “Fleury was the difference-maker. That’s a good team over there, but I thought we did good things and fought hard.”

Pacioretty scored for the second consecutive game, this with the man advantage, to give the Golden Knights a 1-0 lead at 8:35 of the first period.

Linemate Stone scored for the third straight game at 1:02 of the third. It was his 10th goal of the season and sixth game-winner.

“A lot of times, lines are made around two guys and there’s an interchangeable piece there,” DeBoer said. “Stone and Patch have some chemistry; they complement each other. Big goal for us in the third period, and big power-play goal in the first.”

“I think we’ve been able to stick to playing an entire game,” Stone said of his chemistry with Pacioretty. “For courses of a season, you have ups and downs. When you stick to the game plan and let your strengths take over, try not to do much. We’re getting looks.”