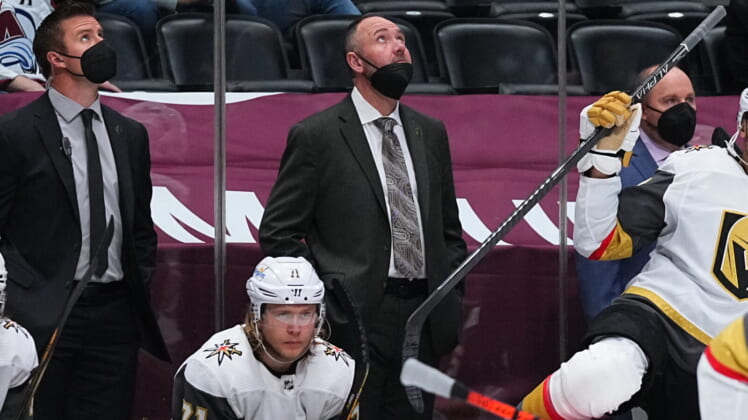 May 30, 2021; Denver, Colorado, USA; Vegas Golden Knights head coach Peter DeBoer during the third period against the Colorado Avalanche of game one in the second round of the 2021 Stanley Cup Playoffs at Ball Arena. Mandatory Credit: Ron Chenoy-USA TODAY Sports

It’s only Game 2 but it already feels like a must-win for the Vegas Golden Knights.

After being the victim of a 7-1 drubbing on Sunday night, the Golden Knights must find a way to pull out a victory tonight else they will head back to Vegas down 2-0. While that by itself may not mean that they are out of the series, it would give all the momentum to an Avalanche team that is firing on all cylinders at the moment.

The Golden Knights will need to be much stronger tonight than they were in Game 1. That starts with cleaning things up in their own zone and not letting the Avalanche be so comfortable with the puck. It’s no secret that Colorado has an embarrassment of offensive riches with the right puck-moving defensemen to activate them. Taking away their space is the only chance the Golden Knights have at containing their attack.

If they can stop the Avalanche from scoring at will, the Golden Knights will then have to figure out a way to get some goals of their own. The responsibility for that starts with the top line of Max Pacioretty, Chandler Stephenson, and Mark Stone. The Avalanche’s big names showed up in a major way last game, can the Golden Knights’ studs match that production?

The Golden Knights are one of the deeper teams in the NHL but their depth is really going to be tested with these fresh faces thrown into battle against the juggernaut Avalanche squad.

Ryan Reaves will be missing tonight as he was suspended for two games after a hair-pulling incident with Ryan Graves in Game 1. Mattias Janmark will also likely be missing after being on the receiving end of an earlier hit from Graves.

The Golden Knights are going to have to reshuffle their lineup to adjust for the missing players mentioned above. From the lines at recent morning skates, it seems likely that Dylan Sikura and Keegan Kolesar are going to be placed into the lineup.

Cody Glass is another player that fans are calling to get into the lineup. He’s a smooth passer and gifted offensively player but can sometimes get lost defensively, a trait that is sure to give the Golden Knights’ coaching staff second thoughts about placing him into the lineup in a crucial playoff game.

The Golden Knights are one of the deeper teams in the NHL but their depth is really going to be tested with these fresh faces thrown into battle against the juggernaut Avalanche squad. Can their bottom-six adapt on the fly and play well even with all these changes or will it just be another weakness that the Avalanche can exploit?

Marc-Andre Fleury returns to the crease

Robin Lehner got his first start of the playoffs in Game 1 and it didn’t go as the Golden Knights hoped. He let in seven goals, though he was far from the one to blame. It was a disappointing result for a goalie that surely wanted to justify the decision to put him in the lineup and give Fleury a rest. While we won’t know for sure until the puck drops, it seems likely that Fleury will return to the crease tonight.

“I think it’s pretty obvious what the answer is, but I’m not going to answer it,” said head coach Peter DeBoer when asked about the starting goalie for tonight’s game, strongly hinting that Fleury will be the one to get the nod.

Fleury was largely spectacular during the first round as he consistently shut down the Minnesota Wild. He will need to find some of that magic and bring it to this series if he wants to give the Golden Knights a chance to win. No matter how good Fleury plays, the defensive performance in front of him will need to be miles better to secure the victory.

The puck drops tonight at 7PM PDT in Denver, Colorado.