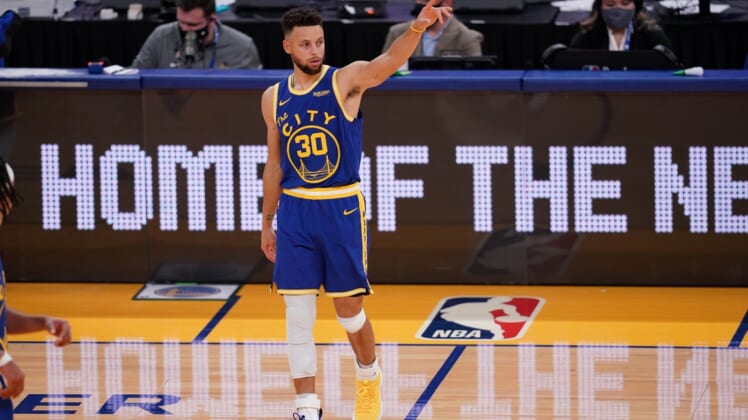 Recent four-time NBA Finals rivals who can hardly recognize one another anymore duel for the first time ever at San Francisco’s Chase Center when the Golden State Warriors host the Cleveland Cavaliers on Monday night.

Players who combined for just 151 of the 868 points in the 2018 Finals are expected to suit up when the teams meet for the first time this season.

Stephen Curry contributed 110 points and Draymond Green 37 when the Warriors swept the Cavaliers in four games in June 2018 for their third title in four years.

Read: Why the Golden State Warriors owe it to Stephen Curry to pull off blockbuster trade

Gone from that team are stars Kevin Durant (sign-and-trade) and Klay Thompson (injury), leaving Curry and Green to carry the heaviest loads on a club that’s remained in the hunt for a Western Conference playoff spot this season at 14-13.

Curry has scored 27 or more points in each of his last nine games, including 27 in a 134-117 home loss to Brooklyn on Saturday night.

Because he missed most of last season with a broken hand, Curry hasn’t faced the Cavaliers since dropping 42 and 40 points on them in a Golden State season-series sweep in 2019.

Green is no sure thing to face Cleveland. He fell hard to the court in obvious pain after trying to defend a Kevin Durant 3-pointer late in the second quarter of Saturday’s loss.

Warriors coach Steve Kerr admitted afterward what he’d seen with his own eyes and what Green was reporting later on were two different things.

“He was in a lot of pain,” Kerr said of Green, who remained on the court for several minutes before being escorted directly to the locker room. He was able to return for the second half.

“I don’t know how exactly to describe what happened,” Kerr continued. “When I got out there, he was in a lot of pain, but he said he would be fine. He said he’s done it before.”

With their seasons shortened by the COVID-19 outbreak and with neither getting an invitation to the NBA bubble, the Warriors and Cavaliers met just once last season. Damion Lee had 18 points and Eric Paschall 16 in a 131-112 Warriors win in Cleveland.

Collin Sexton led Cleveland with 23 points and Darius Garland added 15 in the loss.

Cedi Osman chipped in with 10 points. With Kevin Love and Larry Nance Jr. currently injured, Osman is the only active member of the 2018 Cavaliers who is expected to face the Warriors.

He had just four points in the series.

While the Warriors enjoyed Sunday off at home, the Cavaliers were enduring a seventh straight loss, a 128-111 blowout in Los Angeles against the Clippers.

Sexton finished with 22 points in 35 minutes and Garland 20 in 28 for the Cavaliers, who were able to keep players’ minutes down in the second half of a one-sided game in the opener of a back-to-back.

The Cavaliers also gave veteran center Andre Drummond the night off to rest.

Love has missed the last 25 games with a strained calf. He is likely to return to the lineup sometime on Cleveland’s four-game homestand that tips off Wednesday against San Antonio.

Cavaliers coach J.B. Bickerstaff assured the veteran has been missed.