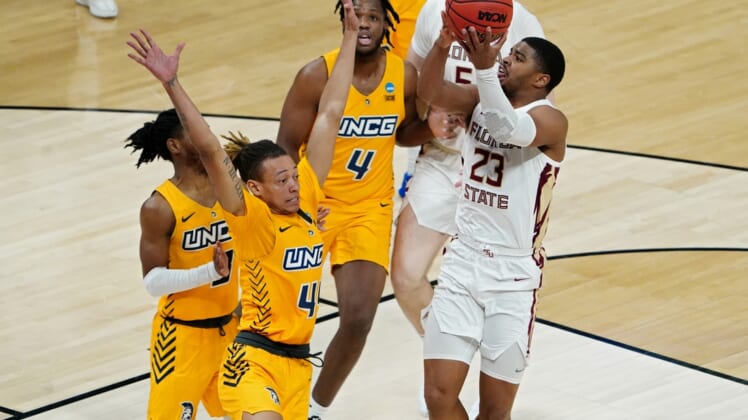 The Florida State Seminoles had to battle to get by North Carolina Greensboro on Saturday while the Colorado Buffaloes breezed to an easy win over the Georgetown Hoyas.

How the teams reached the second round of the East Region won’t be a concern when the two meet Monday in Indianapolis. The No. 4 Seminoles (17-6) needed to hold off a second-half surge by the feisty 13th-seeded Spartans, who cut a 12-point deficit to a point in the final five minutes before losing by 10.

Both teams are tournament tested, having reached the finals of their respective conference tournaments. Florida State had an unusual path, winning their first game before moving to the final after COVID-19 issues forced Duke to forfeit the semifinal matchup.

The Seminoles lost to Georgia Tech in the ACC final but showed no hangover against UNC Greensboro.

Colorado won its first two games of the Pac-12 tournament before being upset by Oregon State in the final. The Buffaloes didn’t let that disappointment carry over to Saturday by winning for the seventh time in their past eight games.

The teams had no common opponent in this truncated season, and the quick turnaround will be challenging for both coaches. Florida State is no doubt aware of Colorado’s McKinley Wright IV, but the Buffaloes’ win over Georgetown showcased the talents of freshman Jabari Walker.

Walker scored 24 points and hit all five of his 3-point attempts, giving the Buffaloes yet another scoring threat alongside Wright, Jeriah Horne and D’Shawn Schwartz. The Buffaloes hit 16 3-pointers in the win and shot 60.7 percent from the field and 64 percent from beyond the arc.

“We’re a dangerous team. A lot of teams can’t run with us, because there are so many skill sets we have,” Walker said. “It’s really hard to beat us, I believe.”

While Colorado used the long ball to win, the Seminoles missed all nine of their 3-point attempts but were able to win by being efficient from inside the arc. Florida State was 25-for-39 on 2-pointers and shot 52.1 percent from the field overall.

The Seminoles got a scare when leading scorer M.J. Walker limped off with an ankle injury in the second half. He went to the locker room but returned a few minutes later to help Florida State hang on. Walker came into the day averaging 13 points per game, but had only four points against UNC Greensboro in 32 minutes.

Walker should be fine for Monday’s game, and is doing much better than his coach, Leonard Hamilton, who suffered a ruptured Achilles tendon last week. Hamilton was wearing a boot on the sidelines and was not bemoaning his situation.

“They say pain is temporary,” Hamilton said after the win over the Spartans. “It’s not going to last for all time. We’ve got a job to do.”