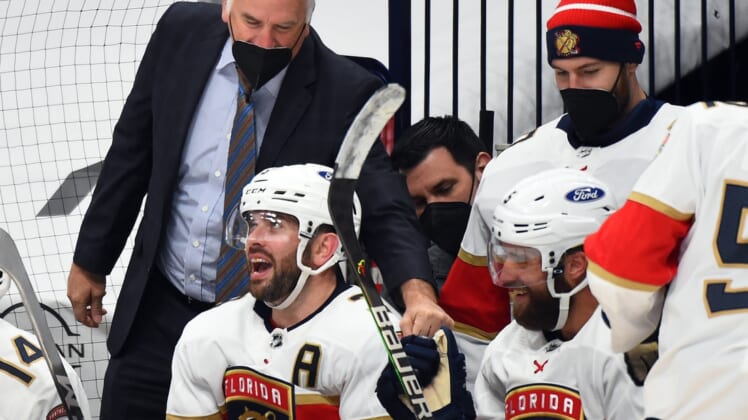 Nearly two months into the season, and the Florida Panthers have yet to lose consecutive games in regulation.

The Columbus Blue Jackets, meanwhile, are trying to keep the losses from further piling up as they try to stay within reach of playoff contention.

Each team looks to bounce back from a defeat when the Panthers visit the Blue Jackets on Tuesday night.

With 15 wins and five regulation losses through 24 games, Florida has been one of the NHL’s better teams. The Panthers have lost consecutive games in any fashion only once this season and last dropped back-to-back regulation contests during the regular season on Feb. 20 and 22, 2020.

However, the Panthers saw a recent 3-0-2 stretch end with a 4-2 loss Sunday at surging Carolina. Florida leads the NHL averaging 34.1 shots on goal but managed just 23 while also yielding at least four goals for the third time in five games.

“You look at our season to date and we’ve been pretty pleased with the compete level and the battle level, but (Sunday) we weren’t great in that area,” said Florida coach Joel Quenneville, whose club is 8-2-1 on the road.

“It was one of those nights where over the course of the season, there’s a couple games where, you know, whether it’s fatigue or scheduling that caught up to you. I’m not making excuses.”

Mason Marchment scored for the second time in three games Sunday, while Panthers star Jonathan Huberdeau recorded an assist for his fifth point in three games.

“We’ve just got to get back to playing our game in the next one,” said Huberdeau, who failed to register any of his team-leading 29 points when the Panthers went 1-0-1 at Columbus in January.

Bobrovsky’s teammate Chris Driedger made 22 saves while losing his third straight start Sunday. He stopped 29 shots in a 3-2 shootout loss at Columbus on Jan. 28.

The Blue Jackets appeared to have turned the corner by following an 0-4-1 slide with consecutive wins over Detroit and Dallas, but Saturday they took a step back in a 5-0 road loss to the Stars in Dallas.

Columbus has scored just nine goals over its last six games, prompting the club to potentially look for some offensive help, particularly at the center position.

“We’ll keep searching and doing our job and building a team,” Blue Jackets general manager Jarmo Kekalainen told The Athletic. “We have some very good potential center-ice men growing into that role within our team. But, we’re also going to look for ways to strengthen that position from the outside.”

Center Boone Jenner scored in successive games prior to Saturday. He failed to score against the Panthers in January.

Joonas Korpisalo was pulled Saturday after allowing four goals on 22 shots in 49 minutes after allowing three total in winning the previous two games. He made 28 saves in the January loss to Florida. Teammate Elvis Merzlikins, who stopped 33 shots in the win over the Panthers two days later, was activated from injured reserve Monday after missing seven games with an upper-body injury.

These teams will play again Thursday at Columbus.