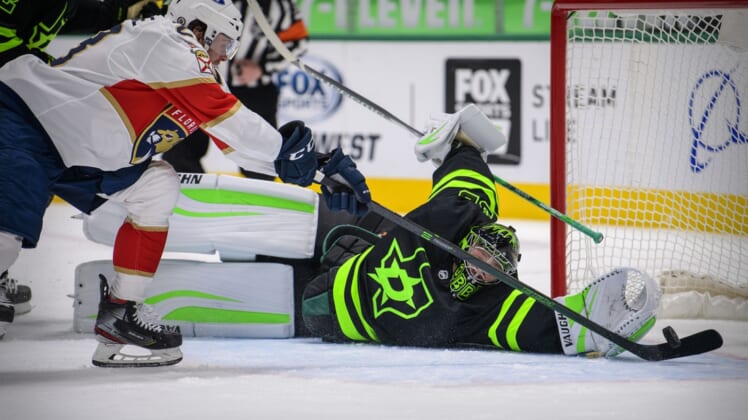 The Florida Panthers have a significant injury issue that won’t be resolved in Texas this weekend, but Aaron Ekblad and Carter Verhaeghe alleviated some of the pain Saturday night.

Ekblad’s apparent game-winning goal was overturned for offside late in overtime, but the defenseman took a feed from Jonathan Huberdeau and backhanded in the real winner 38 seconds later as the Panthers broke a three-game losing skid with a 4-3 win over the Dallas Stars.

The two teams meet again Sunday as the Panthers finish their five-game road swing (1-3-0), but the series finale will have a hard act to follow.

After the Stars battled back twice to force overtime. Ekblad scored on a one-timer on a two-on-one with Frank Vatrano but was soon disappointed to learn that he had crossed the blue line early.

“I was very discouraged. That one hurt,” said Ekblad, who later netted the game-winning tally with 9.3 seconds left in three-on-three play. “In that situation, it’s kind of the last thing you’re thinking of when you have a clear-cut two-on-one — stay onside.”

The first-year Florida left winger scored 24 seconds into the match at even strength, on the power play late in the first and short-handed in the next frame for his second career hat trick.

He became the first Panthers player to score all three ways since Colton Sceviour turned the trick in Detroit on Oct. 30, 2016.

“(Ekblad) scored two there, I guess (the win) was meant to happen,” said Verhaeghe, who capped his four-point night with an assist on the winning tally and leads Florida with 15 goals.

Goalie Sergei Bobrovsky made 31 saves, including one to set up Ekblad and Huberdeau’s odd-man rush, to run his career mark against Dallas to 15-1-1.

Pursuing a playoff spot, the Stars saw the contest turn out to be another wasted opportunity as they fell to 2-9 in overtime and the shootout.

In falling to 7-5-7 overall at home, Dallas failed again to capitalize on the extra point in the extra session, which happened last Sunday against Nashville and five times in March.

Mired in seventh place in the eight-team division, Dallas stands six points behind fourth-place Chicago, but the Stars have played four fewer games than the Blackhawks due to COVID-19 issues and freezing weather last month that paralyzed the Lone Star State.

While frustrated not to come away with two points, Stars coach Rick Bowness said part of the problem was the standout play of Bobrovsky.

“Look at the Grade A (chances) we had,” he said. “You can’t ask for better scoring chances than we had in overtime. Two guys all alone in front of the net — they don’t get any better than that.

“You give their goalie credit. Those two saves he made at the end. I’d be discouraged if we weren’t getting those chances.”