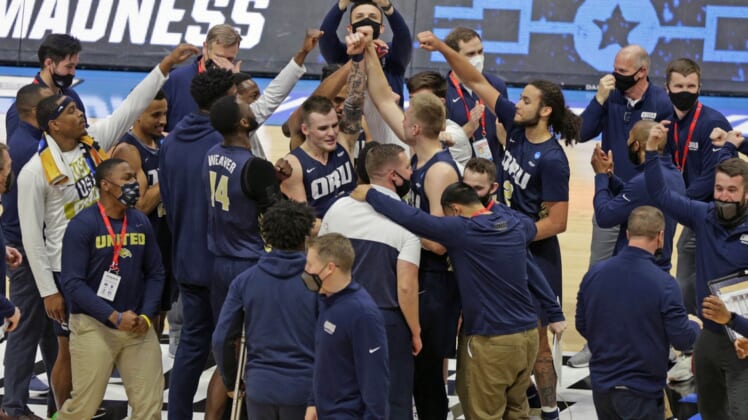 Oral Roberts Golden Eagles link arms and bow their heads following their win over Ohio State Buckeyes in overtime during the first round of the 2021 NCAA Tournament on Friday, March 19, 2021, at Mackey Arena in West Lafayette, Ind. Mandatory Credit: Nikos Frazier/IndyStar via USA TODAY Sports

Giant killer Oral Roberts is ready for its next Goliath following the Golden Eagles’ 75-72 overtime win against Ohio State on Friday.

It was the ninth time a 15th seed had knocked off a No. 2 seed and the first since Middle Tennessee’s victory vs. Michigan State in 2016.

ORU, which was the surprise winner of the Summit League automatic bid as the fourth seed in the conference tournament, stomps on to play seventh-seeded Florida in the South Region in Indianapolis on Sunday.

Mills has reached this level before — as an assistant coach with Baylor. While wanting his players to celebrate the victory over the Buckeyes, he also asked them to understand the potential magnitude of the next one.

“If you spend all your time looking back at your marriage day videos, you’re probably not going to have a very good marriage,” he said. “So, there’s other things to get done. Obviously, you want your players to have this experience and enjoy it. But the reality is I can tell you, I’ve been to four Sweet 16s and that’s a better feeling, so your attention turns pretty quickly.”

The Golden Eagles got 30 points from Kevin Obanor and 29 from Max Abmas, the nation’s leading scorer (24.2 ppg), while committing just six turnovers as Oral Roberts won its first NCAA Tournament game since 1974.

“If your best players are your hardest workers, you have a chance,” Mills said. “I love Kevin Obanor and I love Maxi Abmas. I love all those guys in that locker room but those two work really hard.”

Florida (15-9) won despite going into the game shorthanded and having the lineup further depleted when the team’s third-leading scorer, Tyree Appleby, took an elbow to the face midway through the second half.

He left the game to receive stitches and did not return. Coach Mike White was unsure of his status for Sunday.

White made the decision before the game not to play Omar Payne after the reserve forward was ejected from the SEC tournament quarterfinals for a flagrant-2 foul on Tennessee’s John Fulkerson, who sustained a concussion and facial fracture.

While the SEC did not suspend Payne, White did.

“It wasn’t an overly difficult decision,” White said. “It’s difficult that he can’t play obviously, but it was the right thing to do. That’s it. Omar handled it like a champ. Omar’s very remorseful. We all make mistakes.”

White in the postgame press conference did not say if Payne would be available Sunday.

The Gators did have Colin Castleton, who scored 15 of his 19 points after halftime and grabbed a career-high 14 rebounds. The junior forward also blocked three shots.

He liked the resolve shown by Florida after trailing by 10 in the first half and 44-36 with 15 minutes left in regulation.

“We weren’t losing the game,” Castleton said. “I mean that’s just what it comes down to. You’ve got to have a mindset of we’re not losing this game. We don’t want to go back to Florida just yet.

“We’ve got to keep pushing, keep fighting. … This is what we prepare for. It’s March Madness.”

As Oral Roberts made abundantly clear.