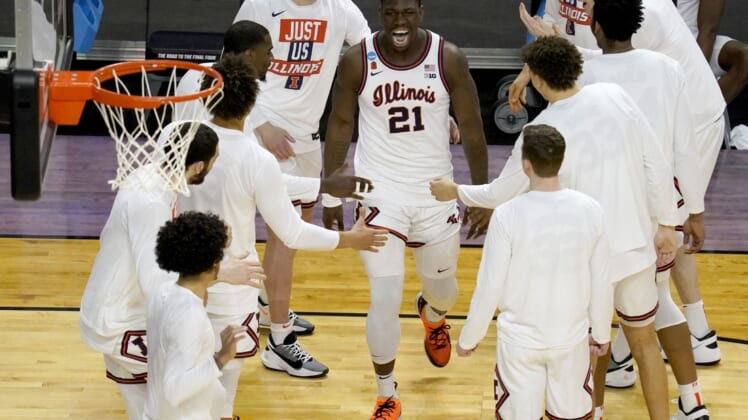 Illinois Fighting Illini center Kofi Cockburn (21) takes the court during player introductions before a game against Drexel in the first round of the 2021 NCAA Tournament on Tuesday, March 19, 2019, at Indiana Farmers Coliseum in Indianapolis, Ind. Mandatory Credit: Grace Hollars/IndyStar via USA TODAY Sports

Illinois is the only No. 1 seed in the state, but it’s not the lone NCAA Tournament team from the Land of Lincoln.

Loyola, the eight seed in the Midwest Region, spent most of the past two months in the Top 25 poll and now gets a chance to show its stuff against the Fighting Illini on Sunday. The winner stays in Indianapolis to prepare for the Sweet 16 and will be two wins shy of the Final Four.

“To see two ranked teams go at it for a ticket to the Sweet 16 is great for the state,” Loyola coach Porter Moser said Friday after the Ramblers dominated the offensive glass and dispatched ACC tournament champion Georgia Tech.

Illinois steamrolled Drexel thanks for All-Big Ten center Kofi Cockburn and All-American Ayo Dosunmu. Cockburn had 18 points, including a run of eight in a row, and Dosunmu awakened from a slow start to chip in 17 points, 11 rebounds, five assists and three steals in the first-round victory.

“We’re sharing it. I think we’re much better in our ball screen reads. I think we’ve been dialed in in terms of what the opponent is trying to do against us, what they’re trying to take away. We know where those looks are.

“I think guys are showing the ability to make those right plays and right reads. When you do that, you share the ball. The game on the offensive side becomes fun, there’s a reason you can shoot.”

Illinois’ depth and punch off the bench has been the difference in a major surge that has the Fighting Illini at No. 3 in the nation.

Lucas Williamson scored 21 points for Loyola in the first-round win and is likely to draw the defensive assignment on Dosunmu. That won’t be a new task for the senior, who was a freshman on Loyola’s Final Four team. That’s because Williamson and Dosunmu grew up playing on the same youth basketball team.

But while Williamson is known for his lockdown defense, how the Missouri Valley champions contend with Dosunmu’s sidekicks — Cockburn, Trent Frazier and the nation’s top 3-point shooter in Da’Monte Williams — could tell the story of the outcome.

Dosunmu is one of four finalists for the Naismith Player of the Year award. He will continue to don a black protective mask through the weekend. Dosunmu is less than a month removed from breaking his nose, and has been applauded for his grit in putting up nearly 19 points and six rebounds per game since his return from the injury.

Moser said it was the Loyola grit factor that helped the team overcome an early push from Georgia Tech on Friday. The Ramblers will need that and then some to keep dancing in Indy.

The last time these teams met in the postseason was the 1963 NCAA Tournament, a Loyola victory on the way to a national championship.