PREVIEW: After feisty Game 3, Islanders try to even series with Penguins

After a wild Game 3 in their Eastern Conference quarterfinal series, when they combined for five goals in a third period that featured two ties and 32 penalty minutes, the fun is just beginning for the Pittsburgh Penguins and New York Islanders.

The Islanders look to even the increasingly feisty series Saturday afternoon, when they host the Penguins in Game 4 in Uniondale, N.Y.

Pittsburgh squandered a pair of third-period leads Thursday night while a crowd of 6,800 roared with a fervor of a gathering three times as large before Brandon Tanev scored with 3:36 left to lift the Panthers to the 5-4 victory and 2-1 series lead.

“It was a great game,” Islanders coach Barry Trotz said following practice Friday. “It was an inspired game by both parties. Both teams care. Both teams don’t like each other.”

The Penguins led 3-1 after two relatively quiet periods before New York’s Cal Clutterbuck jump-started the chaos by scoring at the 3:46 mark of the third. Fewer than two minutes later, 11 players — six from Pittsburgh and five from New York — were sent to the penalty box following a lengthy scrum after a pileup in front of the visitors’ net. 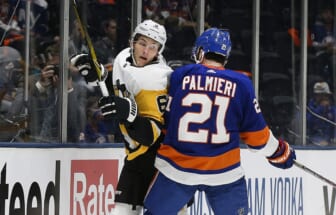 Anthony Beauvillier sent the crowd into a frenzy by tying the score with a power-play goal on the first shift after the fracas. Just 29 seconds later, Clutterbuck was whistled for goalie interference, and Jeff Carter scored to put the Penguins ahead at the 7:00 mark.

Clutterbuck scored again with 5:43 remaining before Tanev collected the game-winner a little over two minutes later.

“Obviously it’s a period filled with emotions,” Tanev said. “Wasn’t our best period, but at the end of the day we found a way to win, and that’s what matters. The guys came together as a group.”

For the Islanders, the intrigue extends beyond the growing disdain between the teams. Trotz expressed disappointment Thursday night with goalie Semyon Varlamov, who allowed the five goals on just 27 shots.

Varlamov had missed Sunday’s Game 1 due to an undisclosed injury and watched rookie Ilya Sorokin registered 39 saves in a 4-3 overtime win. In Tuesday’s Game 2, Varlamov surrendered two goals in the first 13:07 of a 2-1 loss that tied the series.

Varlamov was the Islanders’ goalie for each of their first 14 games in the playoff bubble last summer. But after back-to-back losses in Games 5 and 6 of the Eastern Conference semifinals against the Philadelphia Flyers, Trotz benched Varlamov for Thomas Greiss, who authored a shutout in a 4-0 win in Game 7. Varlamov started all six games of the conference finals against the Tampa Bay Lightning.

Trotz wasn’t about to publicly identify his goalie Friday afternoon ahead of Game 4. But while he said upon reviewing the game he was less critical of Varlamov’s performance, he also sounded like someone still contemplating a goalie change.

“I wish he would have got another save or two, just one short again,” Trotz said. “They’re tough — lot of traffic, those type of things … just wasn’t his night.”