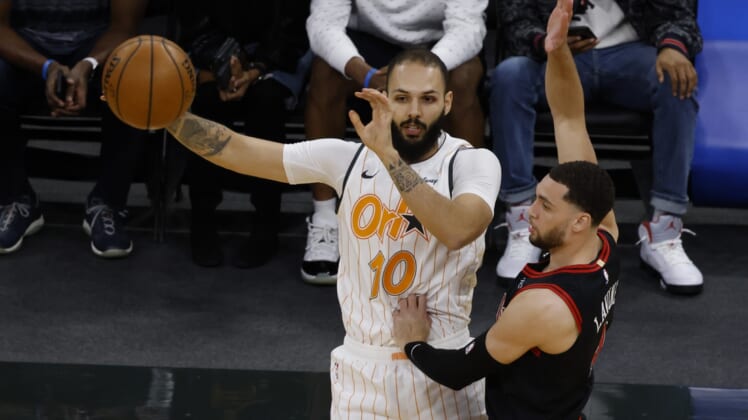 The Orlando Magic will offer up a different look, fresher legs and a little momentum when they get a rematch with the visiting Golden State Warriors on Friday night.

The Magic were riding a two-game losing streak, coming off a tough loss at Portland and without several key players when they gave the Warriors a battle before running out of gas late in a 111-105 loss in San Francisco last Thursday.

This time around, they’ll be playing for the second time on a four-game homestand, having thumped the New York Knicks 107-89 on Wednesday night.

Four guys who didn’t face the Warriors last week — Evan Fournier (19), Michael Carter-Williams (six), Al-Farouq Aminu (three) and Chasson Randle (two) — combined for 30 points in the win over the Knicks. The 18-point margin of victory was Orlando’s second largest of the season.

Fournier had missed the previous five games, and 14 of 23, before putting in 31 minutes against the Knicks. He still considers himself “day-to-day” because of the unpredictability of back spasms.

“I don’t really know how to explain to you what I am dealing with,” he said. “When it’s a finger or a joint, you know how long you are going to be out and what the rehab process is like. The back is tricky because sometimes you feel good and sometimes you don’t. I’m in a tough spot, to be honest.”

Nikola Vucevic provided his usual double-double against New York with 16 points and 16 rebounds. He was even more productive against the height-challenged Warriors last week, going for 25 points and 13 rebounds.

The Warriors headed east for the start of a four-game trip Friday still without their three injured centers — James Wiseman, Kevon Looney and Marquese Chriss. They hope to have one (probably Looney) and possibly two (Wiseman) back by the end of the trip.

Golden State might be even smaller in the rematch, with the chance that Draymond Green can’t play. He missed Wednesday’s 120-112 overtime home win over Miami with a sore ankle.

The Warriors were able to rally past the Heat despite one of Stephen Curry’s worst shooting nights of the season. After having made at least half his shots in 10 straight games, he went just 8-for-25 overall and 5-for-20 on 3-pointers on a 25-point night.

The Warriors rode unusually balanced scoring against the Heat, with Kent Bazemore contributing a season-best 26 points, while Andrew Wiggins and Kelly Oubre Jr. had 23 apiece.

“Great, great win,” Warriors coach Steve Kerr gushed afterward. “The guys played so hard. In the second half, we did a great job rebounding the ball, kept them off the foul line, and our defense really picked up. A great win.

“We haven’t won three in a row all year, so we got a chance in Orlando to start this trip.”

The Warriors have won two straight for the seventh time this season. They’ve lost the next game on each of the previous six occasions.