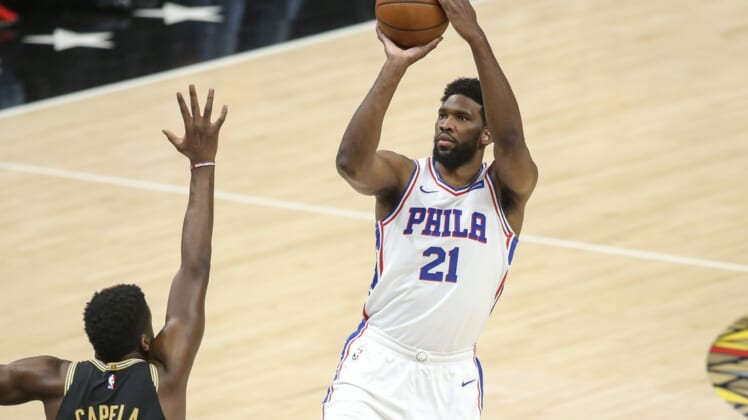 And the goal now is to take back homecourt advantage.

The fifth-seeded Atlanta Hawks evened the Eastern Conference semifinal series with a hard-fought 103-100 victory on Monday. The Sixers will host Game 5 on Wednesday.

Franchise cornerstone Joel Embiid, who’s playing with a small lateral meniscus tear in his right knee, went 0 for 12 in the second half and 4 for 20 overall. Ben Simmons attempted just one shot in the second half and was off the floor for the final possession largely because of his woes at the free-throw line.

In other words, this series is far from over.

“I thought in the beginning of the game, when I went back to the locker room, I just felt like I didn’t have it tonight,” Embiid said. 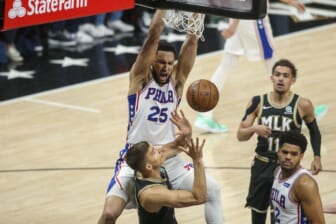 Embiid still finished with 17 points and 21 rebounds, but the Sixers couldn’t hold an 18-point lead.

“That was a blown opportunity. But it happened,” Embiid said. “Can’t change it. Got to move on to Game 5.”

Simmons has been criticized for his unwillingness to shoot, and that narrative was brought up again after a three-point second half.

“I definitely should have been more aggressive and attack more,” Simmons said. “I think the spacing was a little off this game. We didn’t get to our spacing. We weren’t as aggressive in that second half.”

“I can do better,” Embiid said. “I can always do better, but as far as being 100 percent, I don’t think that’s gonna happen until this year is actually over. I just gotta go out and manage it and just deal with it.”

The young Hawks, who dispatched the New York Knicks in five games in the opening round, will look to continue their positive momentum. 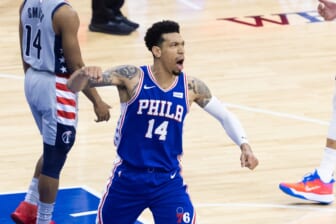 They can take solace in the fact that they won with Trae Young and Bogdan Bogdanovic scoring 47 points despite shooting 17 of 50 from the floor. Young also handed out 18 assists despite nursing a sore shoulder.

“I got hit last game, and it’s been kind of sore,” Young said. “For me, it wasn’t a bother. It was just kind of fighting through it, knowing it was kind of sore. I just tried to work it out and keep it warm throughout the game.”

This scrappy group kept fighting, even when it fell behind by 18 and recovered for Atlanta’s largest playoff comeback in 25 years. The Hawks didn’t shoot particularly well. The offensive execution was shaky at times.

Somehow, they made enough plays to stay in contention.

“Every team is gonna make runs. I love the way we fight, and I’m proud of our team tonight.” 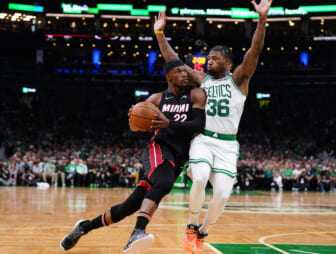 “The hustle game, the scrap game was one of the keys that we felt we had to win tonight to beat Philadelphia,” Hawks interim head coach Nate McMillan said. “John did a great job of getting us second and third opportunities. That was big.”