PREVIEW: Edmonton Oilers have big task: climb out of 0-3 hole vs. Winnipeg Jets

May 21, 2021; Edmonton, Alberta, CAN; Edmonton Oilers forward Connor McDavid (97) and Winnipeg Jets forward Blake Wheeler (26) battle for position during the first period in game two of the first round of the 2021 Stanley Cup Playoffs at Rogers Place. Mandatory Credit: Perry Nelson-USA TODAY Sports

In the regular season, the Edmonton Oilers did not lose four consecutive games, while they drummed up multiple four-game winning streaks.

They need both of those trends to continue when they hit the ice for Monday’s road clash with the Winnipeg Jets. The Jets have a 3-0 lead in their North Division opening-round playoff series and will look to complete the first series sweep in franchise history.

The Oilers, who have lost 10 of their last 12 playoff games counting last year’s qualifying round defeat at the hands of the Chicago Blackhawks, must recover from Sunday’s shocking 5-4 overtime defeat in which the Jets erased a three-goal deficit in the third period en route to a second straight overtime victory. 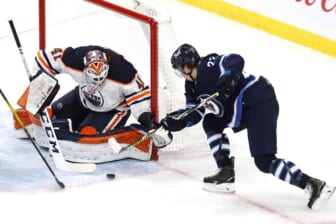 “We’ve dug ourselves a really big hole,” Oilers captain Connor McDavid said. “We’ll take it one game at a time. That’s all we can do. We’re not going to roll over and play dead on these guys. We have to find a way to get a win.”

After nearly 45 minutes of Sunday’s game, the Oilers boasted a 4-1 lead and appeared in a perfect spot to pull themselves back into the series.

Instead, the Jets scored a power-play goal when Josh Archibald took a foolish tripping penalty — for which he will have a hearing with the department of player safety — and then netted two more goals 16 seconds apart before Nikolaj Ehlers potted the overtime winner.

“It’s all trouble we brought on ourselves,” Oilers coach Dave Tippett said. “We did a lot of things well, but there’s certain times in the playoffs where you can turn the tide. Momentum is a huge factor in a playoff game, and the Archibald penalty was a huge turning point of the game.

Instead, the Oilers had a front-row seat to a rarely seen comeback. The game lacked only Winnipeg’s notoriously boisterous fans to make it even more enjoyable. After all, the Jets have never held a 3-0 series lead before.

Only four times in NHL history has a team won a best-of-seven series despite trailing 3-0. It will be tough for the Oilers to become the fifth, but not impossible. Therefore, the Jets are well aware they can’t lose focus on the task at hand.

“You’ve got to enjoy a game like that but … we want to finish this series off,” said Ehlers, who returned to the lineup after missing 11 games and scored a pair of goals in the win.

“We battled back hard (Sunday), and now it’s a matter of going home getting some sleep and getting back to the rink ready for the game,” Ehlers said.

The Oilers won seven of nine regular-season meetings, including the final six clashes, and the Jets have plenty of lessons on the importance of not taking a step back or giving the opposition a ray of hope.

“The biggest takeaway is we’ve got to win another game,” added captain Blake Wheeler. “It was a thrilling game and exciting game, but we’ve got to get ready.”