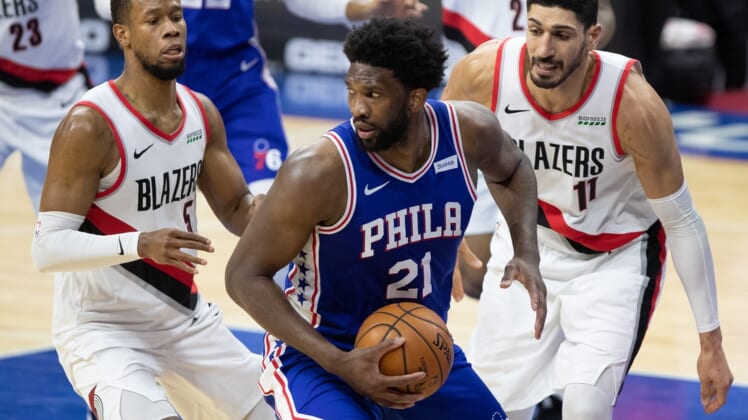 The Philadelphia 76ers are one of the hottest teams in the NBA with six victories in their past seven games.

The lone setback came against the Portland Trail Blazers.

Exactly one week after that loss, the 76ers look to avenge it when they square off against the Trail Blazers on Thursday night in Portland.

The Trail Blazers cruised to a 121-105 victory in Philadelphia on Feb. 4 despite star guard Damian Lillard sitting out with an abdominal injury.

Gary Trent Jr. scored 24 points and Carmelo Anthony added 22 with four other Portland players scoring at least 14 points. The Trail Blazers broke the game open by outscoring the 76ers 40-19 in the third quarter.

Joel Embiid poured in 37 points for Philadelphia on 14-for-21 shooting, while the rest of the Sixers knocked down only 41.7 percent from the field (25-for-60).

Embiid has been on a roll for the 76ers and his 25-point effort in Tuesday’s 119-111 road win over the Sacramento Kings marked just the third time in his past 11 appearances that he didn’t score at least 30 points.

Embiid also recorded season bests of 17 rebounds and six assists as the 76ers prevailed in the opener of a four-game road trip.

But Embiid’s offense wasn’t the most crucial factor. It was the fourth quarter defense of Matisse Thybulle, who was scoreless and didn’t take a shot in 22 minutes.

Sacramento star De’Aaron Fox scored 23 points in the first half with Ben Simmons defending him and finished with 34. But he made just one field goal — and scored three total points — over the final 9 1/2 minutes with Thybulle shadowing him as the 76ers held the Kings to 20 points in both the third and fourth quarters.

“He was great,” 76ers coach Doc Rivers said of Thybulle. “We needed it, too. He did a good job on him. Matisse is better suited for him, and that allowed us to put Ben on someone else. … That was a really good adjustment for us.”

Tobias Harris also was a force late in the game by scoring 12 of his 22 points in the final stanza. He also had 10 rebounds.

Portland has won three of its last four games after producing a 106-97 home victory over the Orlando Magic on Tuesday.

Lillard poured in 36 points for his 13th 30-point outing of the season, but the night was more memorable for teammate Anthony.

The 36-year-old Anthony established season bests of 23 points and five 3-pointers while passing legendary Oscar Robertson (26,710) to move into 12th place on the all-time scoring list with 26,722 points.

Passing the “Big O” was a bit surreal for Anthony.

“That’s a big honor right there,” Anthony said. “I try to play it cool sometimes, I try to sit back and reflect on these moments, take these moments in. I’m enjoying it.

“I’m glad I’m in a situation where I can continue to move up on those charts, pass some people. But the ‘Big O,’ that’s big.”

Next up on the list is another legendary player — Hakeem Olajuwon with 26,946 points.

Anthony, a 10-time All-Star, has topped 20 points in each of Portland’s last three victories and had just two points in the loss — Saturday at his hometown New York Knicks.

Prior to the stretch, Anthony averaged 5.3 points and made 6 of 30 shots during the first three contests of a six-game road trip. Trail Blazers coach Terry Stotts came under fire for continuing to play Anthony but asserted the veteran deserved the right to shoot himself out of the slump.

And that’s exactly what Anthony did. So naturally, Stotts was pleased to see Anthony’s latest achievement.

“I don’t know how long he’s going to play. He could play a few more years, I don’t know. But he was a professional force last year, he’s been really good for us this year,” Stotts said of Anthony. “There’s some highs and lows, but he has earned the respect of our organization, of his teammates, his coaches.”

Last week’s victory was Portland’s fifth in the last six meetings with the 76ers.